Literature / How to Survive a Zombie Apocalypse 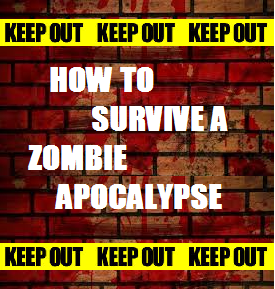 Zombies. When they're not trying to eat your brain, they can be really awesome.
"There are two types of people in this world: those who dream about happiness and those who fight for it. If I were to be put in one of those categories, I'd choose the third: those who don't give a shit."
— Duff Obama
Advertisement:

How to Survive a Zombie Apocalypse

is a comedic parody depicting the usual zombie apocalypse scenario that sets off the same day the main character, Duff, turns sixteen. After a series of events, she is not only forced to kill her already undead family, but is left to fend for herself through the chaos. That is, until she finds an odd group claiming they will put an end to an After the End.

Despite the rather dark beginning, the story quickly jumps to a much lighter note, often falling into the crack category. Started in 2012, it is still ongoing. Has a Character Sheet under construction.