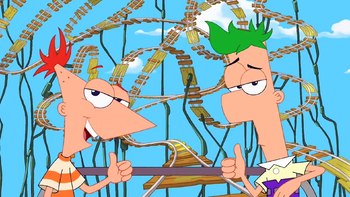 "Corkscrewin' round the interstate, with peanut butter and rubber snakes..."
Advertisement:

Roller coasters are very popular rides, mainly because they give you the thrill of high speed and danger, while actually being relatively safe (depending on where you go). And to capture this thrill, designers try to make them as tall and/or crazy as they can.

Now imagine what you can do without having to follow any laws, not even physics.

In fiction, roller coasters tend to be a lot more extreme and dangerous, often times they go so high that the riders take forever to get to the top, and once there, they're high above the clouds! (Or all the way in low Earth orbit!) The turns tend to be really continuous loops, sharp turns, and impossible corners that would derail any real life cars.

This is purely a Rule of Funny (or Rule of Cool) trope, since this sort of thing could never happen in Real Life (or can it?).

Phineas, Ferb and the neighborhood kids take a ride on their ultimate rollercoaster that goes all over town.

Phineas, Ferb and the neighborhood kids take a ride on their ultimate rollercoaster that goes all over town.