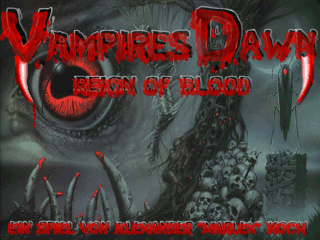 Born to kill.
Mocked by fate.
What is a human life worth
When it’s undead?
Advertisement:

In a World… where vampires used to roam the land freely and prey upon humans, a brave priest by the name of Vincent Weynard united humanity in a Holy Crusade, driving the bloodsucking monsters to near-extinction.

Reign of Blood starts 400 years later with a young warrior named Valnar. His girlfriend Aysha gets captured and butchered by a mysterious stranger. Awakening from unconsciousness later, Valnar is out for revenge. This makes him an easy target for the vampire Asgar, who seeks the blood of a human who slept with a vampire in order to revive the love of his life, a woman named Alaine, as a vampire with the help of a dark ritual.

Valnar soon wakes up as a vampire himself. Asgar and Alaine introduce the fledgling bloodsucker to his situation as one of the last remaining vampires in the world. Still dedicated to finding and avenging Aysha, Valnar convinces them to help him find out what really happened. And so, the three vampires venture forth into a world filled with monsters and strange people, solving mysteries and unraveling a net of intrigue and manipulation that goes far beyond the bizarre murder of Valnar's girlfriend.

Depending on the player's choices regarding Valnar's nature and relationship with Alaine, the game provides four different endings.

Ancient Blood picks up on the first game's Canon ending. It once again stars our trio of heroes, but also features a new human protagonist, a young woman named Nyria, who was confronted with vampires at a painfully early age. Asgar ends up being possessed by a ghostlike being that was sealed inside an ancient spellbook. He is then forced to perform an immensely powerful World Sundering ritual which transforms the world into the state it was long before the Holy Crusade.

The three vampires, now weakened, find themselves engaged in a three-way war over the dominance of nine castles in the world, whose dungeons each house one piece of a stone tablet that could create the most powerful spell in the world. Forced to either hire an army of mercenaries or create new vampires, they have to face both the Elras Mages, who created the tablet in the first place, and their eternal enemies, the Holy Clan Warriors, who attempt to prevent the tablet from being used. Meanwhile, Nyria is found by one of the Clan's warriors. Again, many questions are to be answered throughout the story and a net of betrayal and manipulative schemes make it difficult to trust anyone.

The Crimson Realm once again picks up directly after a certain ending of the previous game. This time, an extended cast of protagonists is introduced, each with their own motivation to get involved in the three-way war between Alaine, Asgar and the Holy Clan Warrior in getting control of the stone tablet fragments. Meanwhile, a fourth faction is lurking in the dark, seeking to reclaim their lost power...

hosts the main trilogy of Vampires Dawn, plus Deceit of Heretics and several bonus content. A new website

, launched in 2019, keeps track of the development of Vampires Dawn 3, and hosts the downloads for the main trilogy only.