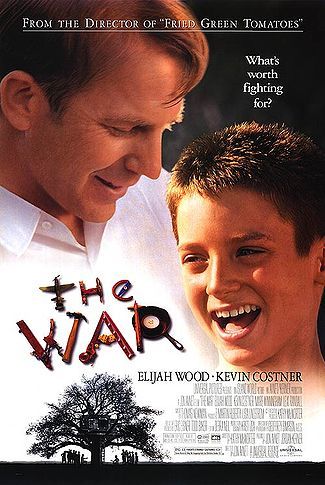 The War is a 1994 drama directed by Jon Avnet and starring Elijah Wood and Kevin Costner, about a young boy who grows up dealing with issues of racism and war in a poor part of rural Mississippi in The '70s.

Stu Simmons (Wood) and his sister Lidia have a small group of friends that includes two black girls, Elvadine and Amber. There is a rival gang of all white kids all having the last name of Lipnicki. They frequently have fights that are similar to gang wars except that they're still too young for real weapons. They start school and their teacher is a very racist white woman whose first action is to make all the black children sit in the back. She then assigns everyone to write an essay on "Why the world is a bowl full of cherries".

Meanwhile, Stu's dad comes home from a mental hospital after suffering shell shock in Vietnam. He struggles with PTSD and there are a number of people who hate him for having been in the war or are prejudiced against him for having a mental illness.

Not to be confused with Ken Burns' 2007 documentary miniseries about World War II.

The War contains examples of: