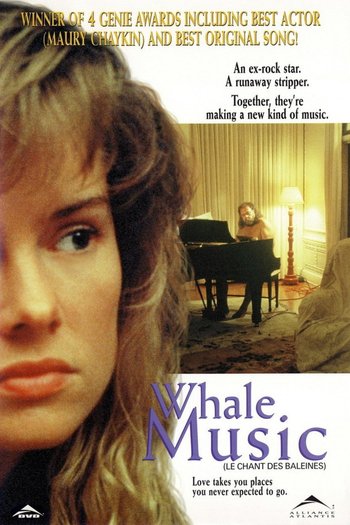 Whale Music is a 1994 Canadian feature film directed by Richard J. Lewis, co-written by Lewis with Paul Quarrington, and based on Quarrington's 1989 novel of the same name.

The film tells the story of Desmond Howl (Maury Chaykin), an aging, eccentric, mentally ill rock star who lives in almost total seclusion in a dilapidated seaside mansion after the death of his brother, spending all his time swimming and recording "whale music"; a concept album of music meant for the whales that swim around his property to listen to. One day, a mysterious young woman named Claire (Cynthia Preston) arrives at his house unannounced; as their relationship develops, Des starts to come out of his shell and deal with the outside world again.

The film's original songs were written and recorded by noted Canadian indie rock band Rheostatics, who had previously named their otherwise unrelated 1992 album Whale Music after the book. The song "Claire", co-written with Paul Quarrington, became the band's first and only true hit and remains their best-known song.

Though the film was not a great success, it was nominated for nine Genie Awards (Canada's then-equivalent of the Oscars), winning four: Best Lead Actor for Maury Chaykin as Desmond, Best Original Song for "Claire" by Rheostatics, Best Overall Sound, and Best Sound Editing.