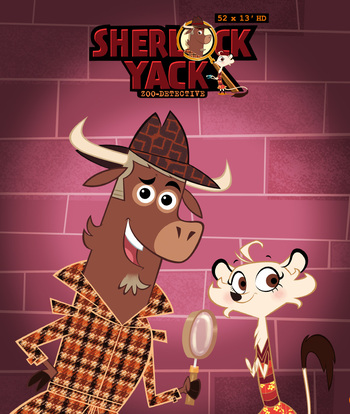 Will you find out before Sherlock?
Sherlock Yack (also known as, Sherlock Yack, Zoo-detective) is a 2011 animated TV series created by Mondo TV, adapted from the novels of Michel Amelin, illustrated by Ruth Christelle (aka Colonel Mustard).
Advertisement:

Sherlock Yack is the zoo's manager as well as its detective. As soon as a crime is committed, he investigates with his young assistant, Hermione. With her help, he finds suspects, clues and proofs... while inviting the young viewer to lead the investigation and find the culprit at the same time.

Despite the title, it bears little resemblance to its namesake what with being a much Lighter and Softer series with the target audience of ages 6-10 in mind.