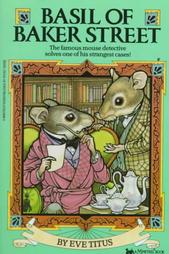 Wait, The Great Mouse Detective was based off of books? Plural?
Basil: Elementary, my dear Dawson.
Advertisement:

Children's book series written by Eve Titus and illustrated by Paul Galdone about Basil of Baker Street, the Sherlock Holmes of the Mouse World, and his personal biographer, Dr. David Q. Dawson. Not as well known as its Animated Adaptation, The Great Mouse Detective. It was out-of-print for a number of years, but the entire series was republished in May of 2016 by Aladdin.