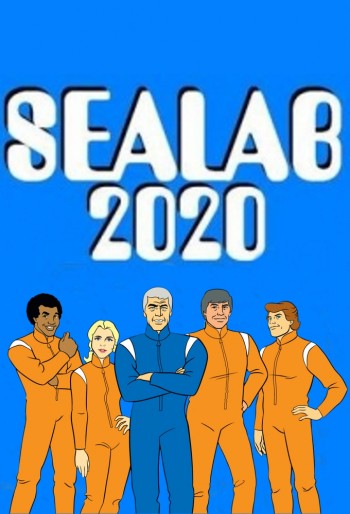 Most of the primary cast (Ed, Gail, Murphy, Paul and Hal)
"This is the year two thousand and twenty. The place is the Challenger seamount, the top of an underwater mountain, a complex beneath the sea. 250 men, women and children live here, each of them a scientist-pioneer. For this is our last frontier, a hostile environment which may hold the key to tomorrow. Each day these oceanauts meet new challenges, as they build their city beneath the sea. This is Sealab 2020."
— Opening Narration
Advertisement:

A short lived Hanna-Barbera cartoon, airing in 1972. The show followed the exploits of the crew of Sealab, an underwater research station devoted to studying, exploring, and protecting underwater marine life. The show had a short run, with only 13 episodes aired (and three left unfinished).

The show wasn't well remembered except for occasional early morning repeats on Cartoon Network, before the burgeoning program block Adult Swim parodied it as Sealab 2021.

Tropes featured in this show: