Literature / Mistress of My Fate 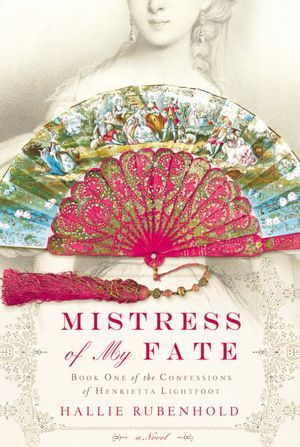 Historical fiction romance drama
And the sublime, the sublime is greater than beauty. It overwhelms the senses. It consumes us. It is the pure fury and power of nature. It must be felt to be known. An artist must feel in order to paint, and of that madam, you will never learn from reading Sir Joshua's dry Discourses.
—George Allenham
Well, reader, I simply could not fathom how I might respond to that. What might a girl who knows nothing of society, of worldly behavior, of nature or passion make of such a statement?
—Henrietta
Advertisement:

Mistress of My Fate is a fictional memoir set in 18th century England. The story focuses on the romance between young, sheltered Henrietta Ingerton and her unlikely love interest, George Allenham. Henrietta was adopted by her uncle and aunt, the Earl and Countess of Stavourley. Her destiny turns out quite different than she had first thought when romance, tragedy, and her mysterious past unravel all at once in this novel.

Tropes Appearing in Mistress of My Fate: