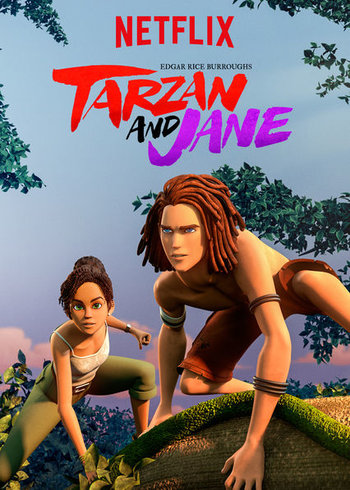 “When the Shaman’s medicine mixed with your dad’s medicine, it didn’t just save me. It changed me.”
Advertisement:

In Tarzan & Jane a plane crash kills the infant Tarzan’s parents. He is found and raised by the ape Kala, who does not bring him back to her fellow apes but instead takes him to the nearest native village, where the Shaman there (and the modern doctor Porter) heals the injuries Tarzan sustained during the crash.

The Shaman then mixes his potions with Porter’s medicines and they then coat the baby during a fire lit ceremony with the essence of cheetah, lion and gorilla. The result? A super-human with speed, strength, agility and the handy ability to grow a set of claws. Come morning Chief Waziri tells Porter that the child has died, but in reality the Shaman and the Chief’s son Muviro has slipped the baby out of the village and entrusted him in the safety of Kala. Tarzan grows up with his superpowers and becomes best friends with Muviro. Doctor Porter makes another visit to the Wazuri village this time with his 15-year-old daughter Jane and when she gets lost in the jungle, she is saved by Tarzan.

The show's main storyline truly kicks in when Tarzan is netted and captured. Turns out the Earl of Greystoke had seen youtube footage of the jungle boy and has realised that Tarzan is his grandson. He’d hired people to infiltrate Porter’s staff and retrieve Tarzan, but when the teen-ape-man is brought to civilization, he wants no part of it.

Luckily Lord Greystoke is able to get Tarzan to understand that though Kala is his mother he did have other parents and that Greystoke is Tarzan’s family as well. The unlikely decision by Tarzan to stay in an unknown home and try fitting in is made easier by the presence of Jane. Tarzan briefly blames Jane for that whole “being captured” thing but once the two bury the hatchet they become a dynamic duo, as they find themselves caught up in animal trafficking, corporate sabotage involving pesticides and, of course, the age-old classic of bulldozers threatening to destroy trees.

Not to be confused with the Disney Direct to Video film Tarzan & Jane, which was a Compilation Movie of three episodes of The Legend of Tarzan TV series.