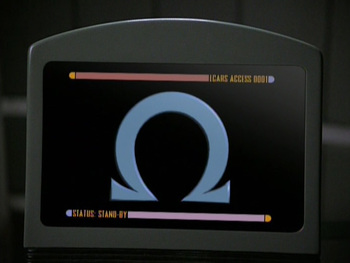 Sensors have detected the Omega phenomenon within one-point-two light years of this vessel.

All other priorities have been rescinded.
Voyager detects the presence of the Omega particle. If there is an Omega particle explosion, faster than light travel would become impossible in the region of space where the explosion occurs. That would forbid the ship from ever making it home to Earth. Therefore Omega must be destroyed.
Advertisement:

The Omega particle is known to Starfleet captains and admirals, but not to any lower ranking officers or enlisted. Since Seven of Nine was in the Borg collective, which has assimilated Starfleet officers like Captain Picard, Seven knows about the Omega directive. She also knows that the Borg revere the Omega particle for its perfection.

Back in the Alpha Quadrant, Janeway would have help dealing with Omega. In the Delta Quadrant, she has her crew, but still feeling guilty about stranding them on the other side of the galaxy, decides she and Seven should go at it alone, just the two of them.