Riley: I've been up 48 hours straight tracking down something bad. Now it's come to Sunnydale.
Buffy: My hat has a cow... 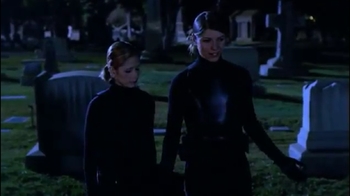 "I gotta tell you, Buffy, I'm a little bit intimidated. I mean, patrolling with the real live Slayer, you're like ... Santa Claus, or Buddha, or something."
Advertisement:

Buffy is at work, cleaning the grill with her coworker Todd, who talks non-stop about college and then leaves Buffy to finish cleaning alone. On the way home from work, Buffy runs into a vampire, but once he finds out that Buffy was working at Doublemeat Palace and smells like it, he tries to escape and instead is staked by an offended Slayer. Finally home, Buffy finds Spike waiting in front of her house. She knows what he's there for, but with Dawn waiting inside, she refuses to let him follow her into the house. Instead, he persuades her to stay outside with him and they drop to the grass together.

Later, Buffy apologetically presents the not-so-appealing bag of Doublemeat Palace food to Dawn for their dinner. Dawn is trying to explain nicely that she can't stand another meal from the fast food place when Willow arrives to take Dawn to the Bronze. Willow notices Buffy's rough appearance and grass stains on the back of her outfit, but Buffy blames it on work and a battle with a vampire. Tired and a bit depressed, Buffy allows her sister to go, but doesn't join them. At the Bronze, Anya and Xander snack on chips while agonizing over the seating arrangements for the wedding reception and other jobs that need completing before the big event. Dawn and Willow sit and have drinks while discussing Xander and Anya's wedding and Willow's newly changed relationship with Tara. Although the two are far from getting back together, there's an open door on communication. Meanwhile, at home, Buffy works to remove the grass stains from her coat.

The next morning, Buffy wakes up amidst her unfolded laundry to the sound of the garbage truck. She rushes to get the garbage outside in time, but the truck drives away. Dawn prepares to leave for school as Buffy returns inside and finds a letter from UC Sunnydale waiting for her. As her sister leaves, Buffy reads the letter from the assistant dean and finds that her application for re-admission has been rejected because she missed the deadline. At work, Buffy tends to the grill like a depressed robot with life offering her little more than her fast food job. Todd decides to send Buffy up to the counter while he prepares the food. Her first customer though is not someone she expected to see: Riley.

Buffy leaves her position to help Riley. They battle but lose track of the monster on the streets of Sunnydale. Riley and Buffy pursue in his car. They talk of catching up as she changes into more appropriate clothing Riley had brought along. A brief interlude show Xander and Anya having a spat while sitting in traffic. At a dam, Riley and Buffy have further battles and lose the demon yet again. Buffy meets Riley's wife.

Sam, as Riley later introduces as her, quickly jumps into a fight with the Suvolte demon. Buffy recovers from the shock of Riley being married and Riley starts to catch her up on his life since he left as they watch Sam deliver quite a beating to the demon. The demon strikes Sam and Riley rushes to help her as Buffy approaches the demon from behind and snaps its neck. Riley's shocked that she killed it and Buffy soon finds out from Sam that they weren't trying to kill it. Improvising, Sam takes a knife from Riley and cuts into the demon's gut as Buffy watches on, still confused. Sam observes that they're too late and the three head for Buffy's home where it should be safe. Riley mentions that Sam's good cutting skills are because she's a doctor and promises Buffy that he'll take the time to fill her in on everything.

At the house, almost everyone greets Riley with open arms — though Dawn is cool with him because of the way he left the last time. Privately, Willow offers to hate the new wife for Buffy but Buffy,who is unable to really hate her herself, doesn't want to be petty. Sam and Riley begin to describe the gory details of the demon and the mission and although Riley's concerned about Dawn hearing about it, Sam sticks up for the teen and she gets to stay with the "grown-ups." Sam explains that the deadly Suvolte demon multiplies quickly and can destroy towns full of people in no time at all and has come to Sunnydale to lay a nest full of its offspring. A demonic dealer in Sunnydale by the name of the "Doctor" is suspected of holding the eggs in exchange for money. The topic of Willow doing magic to help is raised, but Willow explains that she cannot.

Riley directs Sam and Buffy to search for the nest while he investigates the dealer. In the kitchen, Sam tells Willow about a couple of shamans she knew that got addicted to magic and literally didn't survive it. She's amazed that Willow is strong enough to beat the addiction and Willow says nothing, but really takes the words in. Buffy and Sam patrol and talk about Buffy's honorable reputation as the Slayer and of course, Riley. Sam explains how she met Riley for the first time and how much Buffy mattered to him for so long. Sam questions whether Buffy regrets losing Riley and although Buffy does a little, she certainly wouldn't try to change things now. After Sam tells Buffy that Riley did get over her — after a year — she brings up the subject of Buffy's current love life and the Slayer dodges that subject.

Buffy suggests they split up and as Sam heads off to find Riley, Buffy aims directly for Spike's crypt. Upon arrival, she questions his knowledge about the Doctor, but when he has no immediate answers, she changes the subject to his feelings for her and eventually pulls him to her for some physical comfort. Later that evening, Buffy and Spike sleep under a blanket together and Spike wakes to find Riley has walked in on them. The vampire takes the opportunity to emphasize his having Buffy with him. Riley pretends not to care although he clearly does; he identifies Spike as the Doctor and demands to know where the eggs are.

Spike denies knowing anything about the code name "Doctor" or the whereabouts of the eggs, but Riley is confident with his information and starts to tear the place apart. Buffy is unable to believe that Spike could be involved, but as she and Riley go to the bottom level of the crypt and find the eggs everywhere, Spike's cover is blown. Spike and Buffy exchange harsh words and as Spike leaves, the eggs begin to hatch. Little demons crawl out and begin to attack Buffy and Riley. The two escape and Buffy throws a live grenade down where the demons are, effectively destroying them and much of Spike's underground lair.

With family and friends causing mayhem in the apartment, Anya and Xander huddle together in the bathroom. Anya's bugged by the fact that Xander's so interested in Riley and Sam's marriage. Xander reassures her that while he's scared of the wedding, he's confident that the marriage will be great and last forever. Buffy and Riley talk privately and Riley asks her if she wants the "Doctor" to be taken out. Verbally admitting to her involvement with the vampire, Buffy denies his offer and accepts the fact that her life sucks and her ex-boyfriend is there to see it. Riley though tells her that struggling with life like a human being doesn't make her any less of a woman. Buffy tries to apologize for what happened when he left, and again Riley acts stoic, hiding his feelings.

The whole gang gathers to say goodbye to Sam and Riley. While Riley explains to Xander where and how his brief and unromantic wedding took place, Sam and Willow confirm that they have each other's e-mail addresses for future contact (although Willow still calls Sam a 'bitch' for Buffy's benefit). A helicopter arrives and carries the married couple off into the night. The next day, Buffy finds Spike at his crypt and although she doesn't care about his being the Doctor, she brings with her news he does not want to hear. Buffy tells Spike that although she has feelings for him, she can never love him; it would be wrong to keep using him the way she is, so it is over. Spike thinks that this is her usual routine of playing hard to get, but Buffy is serious and walks out with a final goodbye.