"We do not joke about eating people in this house."
—Buffy Summers 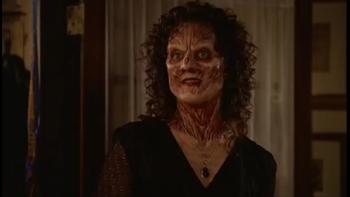 Buffy apologizes to Dawn for having to leave and hunt down a dangerous demon, promising that some real quality time will happen soon. In the cemetery, Buffy fights with the demon, who carries a sword and disappears randomly. Buffy stabs the demon with its own sword and, unbeknownst to Buffy, it's sucked into the blade before she heads back home, sword in hand.

At the Magic Box, the gang talk about Buffy's upcoming birthday party and Xander tells Willow that Buffy wants Tara at the party. A bit too eagerly, Willow agrees that her ex-girlfriend should be there. Dawn arrives and there's a brief talk about The Trio and the complete lack of success in tracking them down. Dawn asks for company to shop for Buffy's birthday gift at the mall, but no one is available and she goes alone. Later that night, Dawn returns home to an empty house and retreats to her bedroom where she unveils a brand new leather jacket underneath her own coat, one she clearly did not pay for.

The next day at school, Dawn's called away from class to the guidance counselor who prods into the young girl's life and tries to get her to reveal her problems. Dawn wishes that people would stop leaving her.

Anya prepares food for the birthday party as Buffy informs her friends that she invited a friend from work, Sophie. Xander and Anya share that they also invited a friend, a guy friend for Buffy, which doesn't please Buffy. Buffy lets Tara in and when the two talk secretly, Buffy explains that Spike wasn't invited because he wouldn't behave around her friends.

Downstairs, Willow and Tara chat, both nervous and unsure about how to behave. The conversation dies off and Tara breaks away to the kitchen for a much-needed drink. After hearing about the party from Willow, Spike shows up, surprising Buffy. With him, he brings beer and another demon, Clem, from kitten poker. Before Buffy has a chance to do anything about Spike's presence, Xander introduces his friend from work, Richard. Buffy goes to show Richard where he can park his car while Spike watches on, clearly jealous. Dawn is anxious for presents to be opened, but Xander and Anya are more concerned with Buffy's progress with Richard and Dawn is yet again treated like an uninformed child. Spike catches Buffy alone and tries to lure her away for some private celebrating, but Buffy's not interested and ignores Spike's jealous jabs at Richard.

Buffy opens her birthday presents and receives a portable back massager from Willow who says it can be used while slaying for instant gratification. Spike likes the gift. Buffy also receives a brand new leather jacket from Dawn. The security tag still attached to the coat draws Buffy's attention, but the new custom weapons cabinet from Xander and Anya that is wheeled out into the room interests her more, leaving Dawn sitting alone on the couch with her gift. Sophie, a girl Buffy knows from the Doublemeat Palace, arrives, and Buffy moves to introduce her new friend, leaving a disgruntled Dawn to shut the door. As the door closes, the guidance counselor steps out of the shadows and turns into the Vengeance demon Halfrek before she says, "Wish granted." The party continues on at full force with dancing and games. Buffy and Richard talk briefly and then Buffy steps away and finds herself alone with Spike in the dining room. He makes jokes about how sweet Richard is and tries to persuade Buffy into some physical activity, but Tara walks in and catches them.

Xander and Anya playfully discuss who will go get beer and Willow ends the excessive cuteness by offering to make the run herself. Instead of getting up and leaving though, Willow simply drops her head to the table. The night of birthday fun continues as the gang play Monopoly and poker in groups while Dawn watches on, happily.

The next morning, no one has left the house and it suddenly seems weird that despite how much they all want to be where they have to be, they don't go anywhere. Spike comments about eating breakfast and that subtly hints at Richard being a meal before Buffy drags him off and the two begin to yell at each other. They talk about leaving the house and getting away from each other, but soon it's realized that they can't leave—something is keeping everyone in the house.

The gang discuss the dilemma, most of them really needing to get to work or school. Dawn snaps at them all, hurt and angry that they all want to leave. Suspicious, the Scooby Gang talk to Dawn and question whether she did a spell or something to lock them all in the house.

The young teen is furious that they would accuse her of such a thing, but they don't drop the subject when she denies it and that only upsets Dawn more. Magic is suggested to fix the problem, but Tara, who doesn't have any supplies with her, is the only one who can do it. Willow reveals that she still has a few items she kept for "emergency only". Tara is anything but pleased, but asks for the supplies anyway and makes it clear that Willow is to keep her distance from the spell-casting.

Tara performs a spell to "release" them from the house, but instead it releases the demon from the sword Buffy brought home. The sword-wielding demon attacks the gang and Richard takes a cut to the chest, but is the only one seriously injured before the demon retreats into the walls. While Richard's wound is tended to, noises can be heard in the walls and Anya begins to show signs of claustrophobia. Xander comforts her and as he goes to get her some water, he's attacked by the demon. Buffy and Spike fight the demon back into hiding, but Xander is injured and still shows more concern for Anya's state of shock than his own physical harm. Buffy and Dawn finally get to talking and Dawn begins to open up.

Meanwhile, the rest of the gang try to figure out a plan, but the only untried solution lies in the magically trained hands of Willow. Anya pressures Willow to try using magic even though she doesn't want to, and Xander reluctantly admits that it may be their only way out. Tara firmly stands in the way of that idea, readily defending her ex-girlfriend. Willow explains that if she starts using magic again, she fears she may not be able to stop. Upset that no one is willing to do anything productive, Anya goes upstairs to find her own solution to their problem. Dawn reveals to her sister that she recently talked to a guidance counselor and may have made a wish to the woman. In Dawn's room, Anya searches frantically through Dawn's possessions, while Xander tries to stop her. Dawn enters the room with her sister and is freaked out by the invasion of her privacy. Anya uncovers Dawn's secret stash of stolen jewelry and objects from the Magic Box, which stuns everyone.

Dawn tries to get away downstairs, but she's followed and Anya goes off on her for stealing. Buffy, realizing the jacket she was given for her birthday was also stolen, has a hard time accepting her sister's behavior and tries to blame the guidance counselor that Dawn talked to for the situation. Anya puts the pieces together, concludes that the one responsible for their mess is Halfrek (a fellow Vengeance demon and friend of Anya's) and summons her because she is the only one who can lift the spell. Halfrek appears in response to Anya's summons, but is stabbed by the demon and falls to the ground.

Spike, Anya, and Buffy fight with the demon and yet again, the demon tries to escape into the wall. Buffy uses the sword to stab the demon through the wall, effectively trapping it within the sword and then breaking the metal over her knee. The demon gone, the only problem left is destroying Halfrek's pendant so they can be freed. Before Anya can get Halfrek's pendant, the vengeance demon rises, barely harmed by the stabbing.

Halfrek seems to recognize Spike, calling him "William," and he finds her familiar too, but both deny knowing each other. Halfrek explains her purpose and its lack of restriction to revenge on men. (Anya's penchant was for revenge on men, as her dislike of men is her particular specialty; Halfrek's is "bad parents".) She informs the Scooby Gang that Dawn's pain and silent but desperate plea for attention was something she hadn't seen so severe in a long time. According to her, the whole gang deserve to be cursed and confined to the house together for all eternity. Halfrek tries to leave, but is herself now a victim of her own curse, and is forced to lift it in order to escape.

As Tara clears up all remains of her spell-casting, she and Willow talk about Willow's possession of the supplies. Tara understands why Willow kept them and is proud that she didn't fall for the temptation of using magic even in a desperate situation, but makes it clear that Willow has to make it without the safety net from now on. Richard is escorted outside and to the hospital while most of the remaining gang depart for freedom from the house. Dawn stays behind, but is pleasantly surprised when, rather than leaving like the others, Buffy shuts the door and stays in the house.