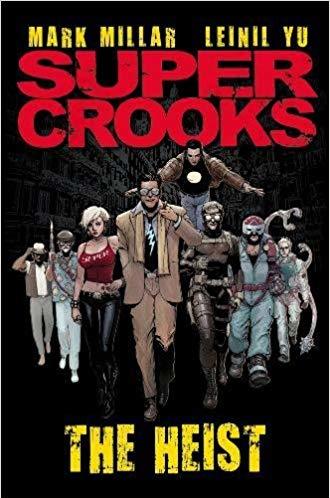 There are too many superheroes in America. Let's go somewhere else...

Supercrooks is a 2012 four-issue comic series written by Mark Millar and drawn by Leinil Yu. Described as "X-Men meets Ocean's Eleven", Supercrooks takes place in a world full of superheroes, and follows a team of thieves, the titular super crooks, as they go about a heist after one member tries to cheat the biggest mob casino in Vegas. After he gets caught, he's given one month to repay the original $12 million debt with the added interest of $100 million... or else.

The super crooks consist of:

Johnny decides to go to Spain, where the superhero population is non-existent, and commit the heist there. Also, his target is none other than the most feared supervillain that ever lived — The Bastard. Not only does he intend to pay off the debt, but he intends to live rich by the end as well.

In 2019, it was announced that Netflix would adapt Supercrooks into an Anime series, with Studio Bones in charge of making it. The release date hasn't yet been revealed.

Tropes that apply to Supercrooks include: