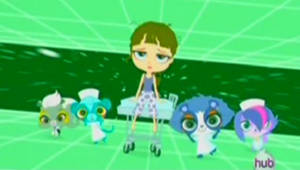 Blythe stumbles into the kitchen and lets Roger know she has a terrible cold. Roger gives her a spoonful of herbal medicine and sends her back to her room, then calls the school so she can take the day off. Blythe travels through the dumbwaiter to let Mrs. Twombly know too, and as she arrives at the day care room of The Littlest Pet Shop, the other pets swarm around her. Blythe attempts to communicate with them but soon finds out she's lost her ability to speak to animals. When the pets realize this, they all turn to Russell for answers, calling him a "humanarian" (a veterinarian for humans). He insists he has no medical knowledge and refuses to help, though he feels bad about it. Eventually, Mrs. Twombly walks in to see what's going on, and seeing Blythe's cold, she insists on taking care of the pets this time and that Blythe return to her room.

Absent from all this is Vinnie, who's busy chasing a fly around the back alley behind the pet shop attempting to eat it, with no success. He chases the fly into a dumpster right before the truck comes by to pick it up. When he winds up at the landfill, Vinnie is delighted to see flies everywhere and attempts to eat some, but they all evade him, and he gets himself injured trying. Before a giant solid slab of garbage falls on him though, the fly he was chasing signals a swarm to lift him to safety. Grateful for its help, Vinnie calls off eating it, and the fly leads him back to The Littlest Pet Shop.

Blythe eventually notices that Vinnie is missing. She inquires the pets as to where he is, but everyone shrugs their shoulders, which Blythe can at least still understand. Blythe instantly falls back asleep in her bed when Penny recalls seeing Vinnie chasing a fly in the back alley. The pets head out to look for Vinnie.

Vinnie eventually comes across a gang of abrasive rats who speak of an anteater named Sally who accidentally wound up at the landfill and was promptly made "gone." Pete, the head rat, offers to send Vinnie home, and Vinnie gladly obliges. He brings Vinnie to the main gate of the landfill, but he points out that it's right next to a shady area of Downtown City and warns Vinnie to never stop moving. A few seconds pass before Vinnie indeed stops moving, and he nearly gets himself run over by a truck and snatched away by a hawk, but he, Pete, and the fly get mauled by some angry dobermans anyway.

The pets brainstorm how Blythe can cheer herself up with her cold, but all of the suggestions are directly related to their species. An exasperated Russell decides to turn towards looking for Vinnie instead, as they figure the cold is responsible for Blythe's inability to understand them and that she'll get over it in time. Russell, using the fact that Vinnie was last seen in the dumpster, assigns Sunil to keep a close watch over the dumpster. After some time has passed, Russell and the others get worried that they have still not seen hide or hair of Vinnie.

Vinnie, Pete, and the fly reach the colorful side of the city but get drenched by an open fire hydrant, then buried in birdseed and repeatedly pecked on by the birds. As Vinnie is about to reach The Littlest Pet Shop, a little girl next door, Alice, picks up Vinnie. She puts him in a frilly dress, imprisons him in a fishbowl, and calls him Princess Precious. After Alice leaves the room, Pete and the fly offer Vinnie a rope so he can climb up to her ceiling fan. Alice returns, discovers what they're up to, and turns on the ceiling fan, flinging all of them back outside.

Blythe's cold recovers rapidly thanks to Roger's herbal medicine, but she mentions it tastes like old socks. Roger looks at the bottle to see if that's actually in the ingredients but discovers a list of improbable side effects, the last of which is not being able to understand pets. Ecstatic, Blythe returns to the day care room later, recovered from her cold, and excitedly asks if they have anything to say. At that moment, Vinnie walks back in and asks if anyone missed him. Blythe, able to understand Vinnie, gives him a big hug and tells him she can understand him to Vinnie's confusion. Pete and the fly, their work done, head to the dumpster of the sweets shop next door to unwind.