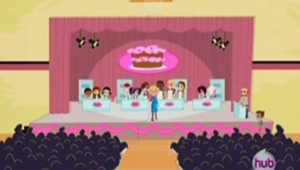 Mrs. Amster, a home economics teacher, and Mr. Barish, a history teacher, interrupt Mrs. Mondt's class to announce The Ultimate Outrageous Cake Competition, where students enter history-themed cakes. Reception is lukewarm until Mr. Barish mentions that the winner will receive extra credit in both of their classes by half a grade, catching the attention of the Biskit Twins. After class ends, Blythe chooses to also enter when Youngmee lends her support, as she helps out at a sweets shop. The Biskit Twins overhear this and discuss among themselves if they should enter. Brittany suggests entering to see Blythe lose, and Whittany obliges, having thought up a nasty scheme.

At Sweet Delights, Blythe, Youngmee, Sue, and Jasper discuss what to theme the cake on, and they decide upon the Taj Mahal. The four of them split up to work on different tasks: Sue will do the research, Jasper will gather materials, Blythe will look for pictures for accuracy, and Youngmee will create the cake.

Buttercream, who has overheard the discussion, returns to The Littlest Pet Shop and fills the other pets in on what she remembers. Unfortunately, Buttercream remembered it all wrong, and Vinnie interprets her words as cake taking over the world by filling up hallways, working himself up into a worry. At the same time, Buttercream demonstrates her newest game, Butterscotch, which Sunil, Zoe, and Russell gladly partake in. Vinnie sees Blythe run through the store front in a panic yelling "Cake!" repeatedly, however, and becomes terrified. Blythe prints out her image of the Taj Mahal and runs back out.

At the Biskits' mansion, the twins' scheme turns out to simply be to make their butler bake the cake for them. Their father Fisher catches them trying this and forces them to do it on their own, then leaves with their butler. The Biskit Twins acknowledge that they can't make a decent cake, but Whittany decides to sabotage Blythe's team so they win by default. They follow her to Sweet Delights under the guise of reporters. Blythe and the others see through it right away, but the Biskit Twins manage to steal their recipe and cake design anyway. Buttercream witnesses it and tries to tell Blythe, but Blythe is too preoccupied with her duties to notice Buttercream.

Buttercream rushes to The Littlest Pet Shop. She says that Blythe is heading for a cake-related emergency, upon which Vinnie grows even more alarmed. When Russell hears Roger telling Mrs. Twombly he's heading for the school to see the cake competition himself, Russell and Zoe accompany Buttercream into Roger's car. Vinnie, who has now donned cowboy attire, follows along to make sure he stops the cakes.

Four teams have entered: Blythe's team, the Biskit Twins, a trio of jocks, and a trio of goths. Each member of Blythe's team came thinking someone else had the recipe card and cake design, but they soon realize it's gone. Blythe attempts to get extra time to find their missing information, but Mr. Barish begins the competition right away. Buttercream shows Russell and Zoe that the Biskit Twins stole the cards, and they sneak over to try to get them back. Buttercream, filled with rage, leaps onto the stage and sneaks her way to the Biskit Twins' table. Knowing Buttercream is in danger, Russell, Vinnie, and Zoe get onto the rafters and drop eggs and cinnamon onto Whittany's head until Mr. Barish climbs up there to investigate. The pets swing back down onto the ground but have bought Buttercream enough time to spot the recipe card and cake design. She brings the cake design back to Blythe but unknowingly drops the recipe card, which stuck itself to one of the jocks' shoes. Youngmee tries to recall as much of the recipe as she can from memory, and they proceed.

After all the cakes have finished, Mrs. Amster and Mr. Barish start judging on appearance and taste. The Taj Mahal cake outdoes the goths' Eiffel Tower cake and the jocks' Alamo cake by a landslide. The teachers then turn to the Biskit Twins, who have made a freaky-looking cake sculpture of themselves. The heads on the cake soon fall off, spraying red borscht berry everywhere like blood and inducing screams and panic on everyone who watches. The teachers declare Team Youngmee the winners, Fisher gets his daughters home glad that they tried, and everyone calls it a day—except for Vinnie, who sees the cake as one of the villainous pastries he feared about. He smashes the Whittany head and brings the Brittany head back to The Littlest Pet Shop as a victory trophy as Blythe hands Russell, Buttercream, and Zoe slices of their cake as a reward for their help.