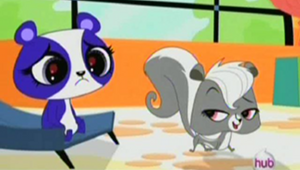 Pepper receives a pair of clown shoes stuffed with pistachio pudding in the mail. She shows it off to the other pets, but they prefer to play with the cardboard box it came in. When questioned, Sunil points out that Pepper had worn pudding-related gags into the ground. Blythe suggests trying comedy without pudding-related props, but this just stumps Pepper until she takes a breath of fresh air outside of the day care room and makes a snarky comment about a visiting bulldog's drool. The other pets find it funny, so Pepper tries some more of these remarks about Mrs. Twombly and then the other pets. Pepper ditches pudding jokes to go into stand-up comedy as it proves popular with the other pets—except for Penny Ling, who finds Pepper's jokes hurtful. Minka lets her know that everyone is perfectly fine with Pepper's insult comedy.

At P.E. at school, the Biskit Twins are forced to play basketball and go up against Vi, who curb-stomps them at the game and repeatedly insults them. Blythe, watching from the sidelines, reaches her limits and tells Vi off, making her leave. The Biskit Twins thank Blythe for defending them and, declaring her their new BFF, drag her away. Blythe gets some time with her normal friends at lunch, but the Biskits serves Blythe an RSVP through their butler. Blythe initially wants to tell them she will decline their invitation, but Blythe gets forcibly seated and her attention occupied by the butler's performance cooking. When she remembers her friends again, she turns around to see they had left the cafeteria without her.

Back at The Littlest Pet Shop, Pepper's jokes come out faster and now strike at the others' sensitive points, such as Russell's weight and Vinnie's intelligence. One by one, they stop laughing at Pepper's jokes. Pepper tries a jab at Penny, but Penny is nowhere in sight. Pepper eventually finds her and, after verbally attacking her despite Russell's protests, causes Penny to cry. The other pets rush in to comfort her, and Pepper realizes the nature of her new comedy.

Blythe lets Youngmee and Sue know that she has had it with the Biskit Twins, but before she can finish, she receives an iPad used solely to display a video invitation for Blythe to hang out with them. Bedazzled at their presentation, Blythe ditches Youngmee and Sue and spends some time in the Biskit limousine and at a department store shopping for clothes. Their influence grows on Blythe, and before long, she looks, talks, dresses, and acts like them. When Blythe joins them in making fun of someone in that department store trying on makeup, she becomes horrified upon finding out that this someone is her friend Sue. Blythe immediately cuts ties with the Biskit Twins, and while the twins accept that, the butler confiscates everything the Biskit Twins had given Blythe during her time with them. Sue discovers Blythe and Blythe apologizes, repairing their friendship.

Pepper attempts to console Penny herself by doing harmless stunts, but Penny remains emotionally hurt. Blythe returns to the pet store, and seeing what happened between Pepper and Penny, Blythe suggests for Pepper to apologize to Penny. Although Pepper begins with a joke thinly disguised as an apology, she quickly corrects herself and delivers a sincere one, admitting that she was only thinking of herself. Penny accepts and even has a pistachio pudding pie ready to hit Pepper's face with, bringing back Pepper's classic comedy.