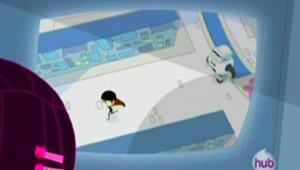 "THANK YOU FOR VISITING THE LARGEST EVER PET SHOP. HAVE A NICE DAY."
Written by M.A. Larson (as Mitchell Larson)

Blythe finishes her shopping for the day with Zoe, anticipating meeting Gail, Zoe's sister. Walking by The Largest Ever Pet Shop reminds Zoe of how Gail was once trapped in there, so Zoe looks inside only to see that it's happened again. Zoe verifies Gail's identity by her unique collar, but when Blythe tries to devise a plan, a robot passes by to pick up a tabby cat and put him back in his cage. Blythe and Zoe step in anyway, Blythe wondering why Gail wound up here when she was supposed to be dropped off at The Littlest Pet Shop, but Blythe bumps into the Biskit Twins. She asks them for cooperation in getting Gail out, but they summon the robot, whom they call Monban. Monban promptly carries Blythe and Zoe out of the store (along with their shopping bags) and gives Blythe a two-week ban from the store.

Zoe is so distraught upon returning to The Littlest Pet Shop that she almost faints. Russell and Minka have already prepared a CD player with "Dance Like You Know You Can" for her to lift her out, but it only annoys Blythe. Blythe stops the song at the end of its second verse and stresses that they need to find a way to get Gail out instead of goofing around. Russell proposes using Pepper's skunk spray to expose the security lasers so Vinnie can dance his way around them and disable the system. Penny will drop in through the ceiling and incapacitate Monban 5000 with her silk ribbons while Sunil will hypnotize the Biskit Twins. Minka will pick the lock to the day camp with her tail, and Zoe will sing to break the plexiglas imprisoning the pets. All the while, Russell will coordinate the pets from the inside and Blythe from the outside through headsets. Everyone agrees to this plan—except Sunil, who has his doubts they can pull it off without a hitch.

Everyone arrives at The Largest Ever Pet Shop donning black winter hats and turtlenecks for the mission, but Blythe is only able to find one headset. Russell proceeds without them anyway, and Pepper and Vinnie dash into the store. Pepper starts spraying while Vinnie leaps further in, but he gets distracted by the odor and trips on his tail. Pepper realizes the lasers would only be up when the store is closed and runs back to Russell to inform him. Pepper heads back to Vinnie, whose eyes are hurting and can't move from his spot when Monban spots them and locks them up in Largest's day camp.

Russell gets word that Pepper and Vinnie have been captured, but he intends for everyone else to keep going as planned, as Zoe can still break the two of them out later. However, Minka gets too excited and dashes into the store, catching the attention of the Biskit Twins on their security system. (As it turns out, they did not spot Pepper and Vinnie because they were too busy texting each other.) They send Monban after Minka, and after a frantic chase, Monban captures Minka and tosses her into another empty cell.

Without the lock-picker, Russell resorts to completely re-thinking his plan, this time involving disabling the robot with high frequencies coming from one of the cash registers. Blythe realizes Russell is coming apart and charges into The Largest Ever Pet Shop herself. Monban soon finds her and pursues Blythe but eventually loses her. Meanwhile, Zoe hurries into the store by herself and reaches the day camp unchallenged but hits her head on the glass door. "Dance Like You Know You Can" starts playing over the radio, and while it wakes Zoe up, she causes a ruckus and bumps into Monban, who puts Zoe in the slammer and ejects Blythe from the store.

All of this activity took a toll on Monban's battery, and he shuts down. Whittany plugs Monban into the wall to recharge, and Penny takes this opportunity to try to incapacitate Monban. Penny, however, wraps herself up in her ribbons and instead runs to the day camp herself. Her ribbons then entangle a large pile of merchandise, which catches the Biskit Twins' attention. Whittany unplugs the now-recharged Monban, and Penny is easily caught due to her load slowing her down.

With only Russell and Sunil left, and Blythe having been caught twice, Russell is frustratedly out of ideas. Blythe comes up with one last plan though, which requires Sunil to go into the store, hypnotize the Biskit Twins, and put the headset on Monban's head. Initially, Sunil is scared to death, but Russell lets Blythe know that Sunil hates cobras. Blythe tells Sunil to imagine all the objects in the store as cobras, and it riles Sunil up so much that he charges into The Largest Ever Pet Shop and wrecks merchandise until the Biskit Twins see him. He effortlessly hypnotizes the Biskit Twins into a daze and tosses the headset from his head onto Monban's. When Blythe sees this, she mimics the twins' voice and commands Monban to release all of the pets. They all escape safely—except for Tiger.

Back at The Littlest Pet Shop, Zoe discovers they had just rescued the wrong dog, whose name is Tootsie and is male. Gail had been hanging out at the correct location shortly after the regulars had left for The Largest Ever Pet Shop, to which Zoe says that all cavalier King Charles spaniels look the same to her and that she's broken out the wrong dog from Largest before too.