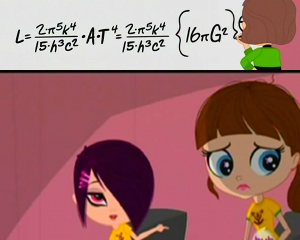 "Three little black dresses discontinued but for sale in that vintage place on Claremont, and two pairs of wedge platforms with the glittery straps in a buy-one-get-the-next-half-off promotion."
Written by Julie McNally Cahill, Tim Cahill, and Adam Beechen
Teleplay by Adam Beechen

A frazzled Blythe frantically recites for the upcoming Mathletes event as she feeds the pets and scrambles out the door. She rushes by Mrs. Twombly, who tries and fails to inform Blythe about a newspaper article she's reading about undercover animal government spies. The pets are paying attention, however, the idea fresh in their minds when a man in a trenchcoat and fedora stops by to drop off a Siamese cat named Scout Carey and sneaks back out. As soon as Scout's pet carrier door opens, she leaps to the top of a scratching post, gives the other pets a furious glare, and starts ripping the paper displaying the price, to the other pets' horror.

As Blythe and the other Mathletes members go into the meeting room, they find the Biskit Twins in the back, though they're just serving detention. Mrs. Mondt writes equations on the board for practice, but the Biskit Twins, bored out of their minds, solve each equation before any of the Mathletes team members could: Whittany translates the equations into complicated mall sales as Brittany processes it into the correct answer. Sherman, on the other hand, is unable to take the pressure and freaks out during the session, taking him out of commission for the day. Unfortunately, there is a Mathletes event in the afternoon, and they require a stand-in for Sherman. Blythe suggests the Biskit Twins, but Mrs. Mondt laughs this off and rejects them due to their low test scores.

Back at the pet shop, the regulars grow suspicious of why Scout is constantly staring at Mrs. Twombly while shredding paper. They start feeding off each other's fears and conclude that Scout was sent from The Largest Ever Pet Shop to shut down The Littlest Pet Shop. At first, they repeatedly try to ask Scout what she's doing, but Scout just sits in one place ignoring everything or reacting hostilely without speaking.

Blythe comes up to the Biskit Twins and asks them to join the Mathletes team complimenting them for being geniuses, to which they somehow take offense to. Regardless, they promise to join if Blythe stops calling them "geniuses" and end their detention with Mrs. Mondt. Blythe accepts the deal but isn't sure how to fulfill her end.

The pets position themselves all around the pet shop and keep a close watch on Scout. Scout bares her claws and takes a lunge at Mrs. Twombly, prompting Minka, Pepper and Sunil to slow Scout down, but they are unable to stop her. At striking distance, Mrs. Twombly suddenly walks off to a ringing phone, forcing Scout to retreat. On the other end is Vinnie, who kept a phone handy for this reason.

After much bargaining, Blythe convinces Mrs. Mondt to let the Biskit Twins into the Mathletes team for the day, offering to take over their detention time if they lose. However, the Biskit Twins object to the bright yellow shirts the Mathletes have to wear to the competition. Whittany swallows her pride and arrives at the competition wearing it, but Brittany suffered an allergic reaction to the polyester and has been incapacitated. Blythe drags Whittany into the third-seat chair at the Mathletes event kicking and screaming.

The pets resort to more desperate measures to keep Scout away from Mrs. Twombly: Sunil attempts to perform martial arts (though of an unspecified kind), and as a skunk, Pepper attempts to spray Scout, but Scout proves too nimble for either of them. Russell tries luring Scout away with a cat toy attached to a fishing rod, but when she catches it, Russell is unable to pull Scout away. Vinnie sneak-attacks Scout as she lunges from the top of the scratching post once again, this time successful. The other pets capitalize on this moment of surprise and pile onto Scout to prevent her from moving, but everyone falls to the floor. Scout explains that she loves shredding paper and was never after Mrs. Twombly, but the newspaper kept in her pocket.

The teams are tied at the Mathletes competition by the final equation. Blythe and Youngmee have burned themselves out and turn to Whittany, who has spent the whole time filing her nails. Whittany is able to translate the equation to fashion sales, but without Brittany to interpret it back into an answer, her attempted guess is completely wrong as they run out of time. The competing team had since come up with the correct answer, and Blythe's team loses the event, taking them out of the competition. As per her agreement with the teach, Blythe must serve detention in place of the twins.

When Blythe returns to the pet shop, all of the pets try shredding paper too. Zoe explains that she was wrong to jump to conclusions about Scout's behavior. When Mrs. Twombly hands Blythe a stack of more newspapers for the pets to shred, Blythe lets Mrs. Twombly know that she's been reading a News Parody the whole time, which hits Mrs. Twombly and the pets like a bomb. Scout's owner returns to the pet shop, and as Scout leaves, she points out to the others that she may or may not be a spy, notably changing accents and leaving everyone feeling uneasy.

Meanwhile, Brittany remains stuck in the women's room at the school in desperate need of itch cream for her allergic reaction, everyone having forgotten about her—even Whittany.