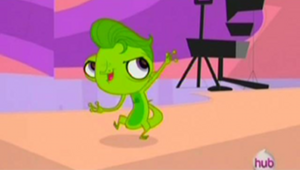 "Vinnie, why don't you go dance for them? Maybe they'll put you on TV!"
Written by M.A. Larson (as Mitchell Larson in the ending credits)
Advertisement:

The episode begins with an Imagine Spot of a 100-foot Vinnie, who seeks out Blythe and the Littlest Pet Shop regulars one by one, demanding for the remote control. Eventually, Pepper finds the remote and brings it back to Vinnie, who immediately calms down and watches Shake-A-Leg, a dance competition show he's a big fan of. Blythe, having noticed there is a DVR in the room, asks why they don't use it—Pepper points out that Russell has hogged it solely for The Duchess of Lancashire Lane.

Seeing Vinnie's excitement whenever he watches, Blythe lets him know they're heading west and asks Vinnie if he'd like to see Shake-A-Leg live in Hollywood. Vinnie gets extremely excited over the thought, making a mess of the day camp room even further. Blythe brings Vinnie onboard the trip, courtesy of Blythe's father Roger, and Vinnie subsequently makes a ruckus in his pet carrier the entire way through. Once at the set, Blythe and Vinnie split off from the tour group, where Vinnie name-drops the dancers to Blythe. Blythe tells Vinnie she'd like to be on camera just this once but regrets that she is incredibly camera-shy. Nevertheless, Blythe tries for some autographs from the dancers.

Without Vinnie, the other pets try to think of ways to keep the remote control in one place so Vinnie can always easily retrieve it. Minka puts it in an air conditioning vent, a location impossible for anyone to reach except her. She then realizes it's a bad idea when the air conditioner turns on, the gust of air knocking the remote control away and sending her crashing down. Pepper proposes the "Peppermatic 2000," a bedside desk to put the remote on any time someone finishes using it. Pepper's penchant for pranks gets the best of her, however, as Russell discovers she glued it to the desk, rendering it unusable without moving the entire desk around with it.

After Blythe obtains autographs from all of the dancers, she suggests seeing if the judges might like his performance. Vinnie scurries over to the judges' tables and starts dancing frantically. Unfortunately, when they see him perform, they absolutely chew him out and critically tear him apart. Heartbroken, he returns to Blythe with the bad news, then sulks into another room.

Back at the Littlest Pet Shop, Penny suggests taking a leash and tying the remote to it, but everyone else dismisses it as dumb. During this time, Zoe had already disposed of the TV as her solution under the impression that because Vinnie wrecks the room when he can't watch his TV show, she'd just remove the problem by removing the TV. Russell points out that it won't stop Vinnie from wanting to watch Shake-A-Leg and that he'd become even more destructive. Unable to properly reply to that, Zoe retrieves the TV with the help of Minka, Sunil, and Pepper. However, once they plug it in, no one knows how to navigate the startup menu, and they are once again stuck.

Blythe sees Vinnie throwing his autographed photos away. Figuring what transpired, she offers to make Vinnie some dance clothes in hopes of allowing the judges to take Vinnie more seriously. At that very moment, however, Karina Tatarov has gone on vacation, throwing the dancers for a loop, particularly Igor Posokhov, who was assigned to dance with Tartarov for that episode. The P.A. spots Blythe holding her dress she got at the gift shop and forces her onstage as the new Tartarov. The P.A. ignores Blythe's pleas that she's never danced and she's afraid of being on camera, and the staff drags her away screaming. Vinnie says that he's no good at dancing either and heads outside.

Before long, a chameleon overhears Vinnie's protests of frustration. He introduces himself as L-Zard and brings Vinnie to his group of breakdancing lizards. At first, Vinnie is overwhelmed by their moves, but after Skink-a-dink-a-dinkity-dink turns on the music, he can't help but dance in perfect lockstep with them. L-Zard says that he's good enough for "that dance show," upon which Vinnie realizes Blythe needs his help.

Vinnie makes it back to the studio just in time, with assistance from L-Zard's crew, for Blythe to appear onstage—and just in time for Russell to get to the end of the TV's startup menu so the pets can see Blythe on TV. Vinnie goes under Blythe's dress and coordinates where she goes, leading to a flawless number that the audiences and judged love alike, though Blythe and Igor Posokhov alike are in constant panic not knowing what's going on. Seeing the 10s from the judges, Blythe steps back onstage for a bow, having forgotten the cameras were there.

Back at the Littlest Pet Shop, Pepper tells Blythe that they showed the episode twice, so Pepper recorded it for Blythe—only for Russell to realize she taped over a major episode of The Duchess of Lancashire Lane, chasing Pepper out of the room.