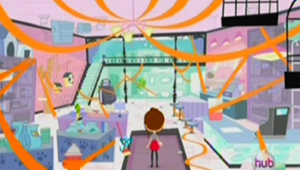 "If you don't count the fact that we're being taken over by an evil horde of robotic toys, who may or may not torture us before they destroy us, then yes, it is not so bad."
Written by Julie McNally Cahill, Tim Cahill, Evan Gore, and Heather Lombard
Teleplay by Evan Gore and Heather Lombard

Mrs. Twombly decides to spend the day brushing and spraying The Littlest Pet Shop until it's free of dirt and dust. In the process, unbeknownst to Mrs. Twombly and Blythe, Mrs. Twombly activates the robotic mice cat toys, sending them scurrying into the day camp room. Russell and Sunil chase one down, but Pepper tricks Sunil into thinking the mice will replace real pets in the future, worrying him into a corner. Blythe finds a moment and lets Mrs. Twombly know she will set up a Blythe Style display at the front window.

Meanwhile, Penny and Vinnie argue about whether Penny's silk dancing or Vinnie's tap dancing is better. Neither side giving in, they initiate a dance-off, which quickly ends as Vinnie trips on his tail and sends him and Penny crashing. They get the attention of a new face in the day camp room, however: Madam Pom, a pomeranian who was chosen over Zoe to be a professional lapdog model. Madam Pom suggests Penny and Vinnie dance together, for as opposites, they complement each other. Zoe drops in, however, and she and Madam Pom instantly rage at the other's presence. Zoe goes to the store front as Madam Pom remains in the day camp room.

Blythe sees Zoe and tells her she knows Madam Pom is there. Zoe warns Blythe that Madam Pom is evil and that she'll stay at that window for some time. Blythe then hears Mrs. Twombly scream—it turns out she's run out of Mrs. Applebottom's Omega-3 Cleaning Spray, the only spray she trusts. Mrs. Twombly rushes out the door to go buy some more and entrusts Blythe with responsibility over the storefront. Blythe steps into the day camp room and tells the pets she'll continue working on the window display. Seeing no trouble going on, she tells the pets not to roughhouse and heads back to the front.

Madam Pom borrows Sunil's cushion to watch Vinnie and Penny perform their new act. They dance together but still don't collaborate, causing the two of them to bump into each other, knocking over a bin of bouncy balls and spilling kibble all over the floor in the process. The food on the floor causes the other pets to come scrambling over, making even more of a mess. When they're done eating, Madam Pom shows a scrapbook of acting gigs she's done, but it ticks Zoe off so much that she comes over to give Madam Pom a piece of her mind, leaving both of them too enraged at the other to help with Russell's attempts to clean the shop.

Mrs. Twombly reaches the organic market to pick up more Mrs. Applebottom's but discovers they stopped stocking it as the company started sneaking in jet fuel. She tries the mega-sized department store next but, after much searching, also comes up empty-handed. Consumed with frustration, Mrs. Twombly delivers a rant about dirtiness to everyone in the parking lot before descending into an insane laugh.

Back at The Littlest Pet Shop, Zoe and Madam Pom find out about Blythe setting up a window display. They see her putting animal mannequins and both decide to model there to show up the other. Madam Pom returns to the day camp room to put on makeup when Penny and Vinnie ask if their dancing is professional level. They offer ideas to Madam Pom, but both involve solely their own style of dancing. Madam Pom hastily suggests a routine with swans and gets back to the mirror. At the storefront window, Blythe convinces Zoe that winning that one contest is not that important and that this act at the window will prove nothing. However, once Zoe calms down, Madam Pom returns to the window, riles up Zoe with more bombast, and puts on a Blythe Style outfit. Zoe, unable to take it anymore, finds a getup of her own, and the two engage in a pose-off as Blythe rolls her eyes.

Vinnie and Penny continue to practice dancing independently of each other. Vinnie's tap-dancing causes him to crash into things—and his hat toss sets off all of the robotic mice, which scurry everywhere in the shop crashing into more things. Penny's ribbon in her silk dance, meanwhile, tangles itself on all of the fixtures in the day camp room. One of the robotic mice makes its way to Blythe's feet, and she leaves to go put it back. Zoe and Madam Pom, left to themselves, furiously pose for passers-by and draw a crowd.

Mrs. Twombly zooms around the city rambling about dirtiness and dustiness when she discovers a window washer using Mrs. Applebottom's Omega-3 Cleaning Spray. She instantly calms down and obtains a bottle of her own, though it is not clear whether she found a place that stocks it or if she got it from the window washer.

Before Blythe even reaches the shelf of robotic mice, Vinnie and Penny have created a mess of the entire store. Russell, Pepper, and Sunil struggle to get everything back where they belong but cannot keep up, and Minka joins in on unleashing chaos. Blythe turns around to see Vinnie about to jump from the second-story railings for his "grand finale." She leaps to try to stop Vinnie, but he lands on a net of ribbons supported by all the furniture in the storefront, tugging on the net and causing the furniture to come crashing down. Zoe and Madam Pom get caught in it all too and get roughed up in the debris. Their audience having lost interest and left, they both have a good laugh at the fun they had at the window and gain respect for each other, Madam Pom admitting that Zoe is the better walker while Zoe admits Madam Pom poses better.

Vinnie and Penny emerge from the top of the destroyed furniture to realize the destruction they caused. Mrs. Twombly calls Blythe on the phone to let her know she'll return in twenty minutes. Upon hearing this, Russell coordinates everyone nearby—including Madam Pom—to sort everything out in the store, throwing away anything too damaged to be re-organized. They finish just in time for Mrs. Twombly to return, who's astonished at how tidy and clean the store is. Russell points out that her cleaning mood is over just before the garbage bag Vinnie negligently tossed upwards comes back down and douses everyone with dust.