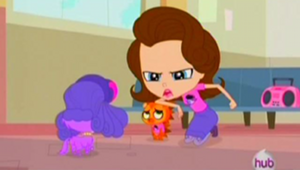 Christopher Lydecker, a producer, mistakenly walks into The Littlest Pet Shop mistaking it for The Largest Ever Pet Shop, requesting the Biskit family be on the program Terriers & Tiaras. Blythe almost directs him to the right location when Zoe begs Blythe to put her on. Blythe initially resists, but Zoe refuses to give in, and Blythe requests Lydecker to put Zoe on the show. Minka and Russell volunteer to help Blythe out for anything she needs.

Somewhere else in Downtown City, the other pageant contestants arrive to get televised by the crew: Judi Jo Jameson and her maltese Princess Stori, accompanied by Judi Jo's assistant Philippa, who like to arrive extra-early to stake out the area; Cindeanna Mellon, whose Yorkshire terrier Shea Butter gets pampered to a ridiculous extent; Tanya Twitchel, who trains her griffon bruxellois Sam U.L. for the pageant eighteen hours per day to stay in peak physical condition; and a terrified Blythe Baxter and her cavalier King Charles spaniel Zoe Trent. Blythe is initially too nervous to say much on-camera, so Christopher lets her see Judi Jo speak. Zoe notices Princess Stori and starts gushing about Stori to Blythe. Unfortunately, everyone else hears it as Zoe yapping like mad, and Blythe has to leave the area.

Blythe brings Zoe over to the obstacle course for a practice run, but Zoe refuses, insisting that Zoe can win on style alone. Minka shows Zoe by effortlessly running through it, with Sam U.L. following a moment later. Blythe implores Zoe to try, and Zoe does—but chickens out at walking across the first obstacle, a seesaw, and clings onto Blythe's face in terror, putting both of them out of commission.

During the beauty round, Blythe overhears Judi Jo telling Philippa that the taller a pet's hairdo, the prettier he or she will be. Blythe takes this advice and styles Zoe's head, pleased with the results. She gets so pleased that by the time Shea Butter is demonstrating her talent of catching frisbees, Blythe is boasting about Zoe on the interview couch, no longer frightened of the camera. After Judi Jo shoos Blythe off the armchair, Blythe heads to a back room and puts Zoe on vigorous dance practice. Russell initially comes up with a routine, but Blythe rejects it for a simpler but more obtuse dance. After Zoe performs it once, Blythe takes Zoe elsewhere. Russell and Minka have witnessed the whole scene, and both feel worried for Blythe's new attitude.

Blythe emerges in front of the stage loudly mocking the other contestants. Shea Butter and Sam U.L. sit next to Zoe and lament about Blythe having become a Stage Mom. Zoe initially denies this, pointing out that Blythe tends to get very into everything she does. Shea Butter, however, points out that Cindeanna and Tanya used to play with their pets, but the pageant circuit brought out their bitterly competitive sides. Zoe goes up to Blythe, telling her that she's nervous. Blythe, in return, asks Zoe to put on her dress Blythe made for Zoe's birthday but sees that Blythe had modified it. Zoe feels heartbroken to have seen Blythe mess with her favorite dress, but Blythe only cares about winning. Blythe forcibly puts it on Zoe and leaves to start an argument with Judi Jo.

Princess Stori walks over to Zoe to get away from the two of them, and Zoe explains to the maltese about Blythe's nonchalance over the butchering of her birthday gift to Zoe. Princess Stori points out that it's nothing compared to how he's had to put up with crossdressing and being called "Princess" his entire life. When Zoe asks why he endures it, Princess Stori says that it makes Judi Jo happy. Zoe, however, sees Blythe and Judi Jo arguing their lungs out and tells him they don't look too happy. When Shea Butter and Sam U.L. come over, she convinces the three of them to sneak in some fun through Philippa's dog treats, but before they can head off, Judi Jo and Blythe grab Princess Stori and Zoe and take them onstage.

On Zoe's turn, Zoe rips off the dress and runs backstage. Blythe chases her into the makeup room and demands Zoe help her win and beat Judi. Zoe snaps back, saying she no longer cares about winning or the pageant and runs off again, slipping past Blythe. Blythe decides she doesn't need Zoe to win and substitutes Russell in Zoe's place, which Christopher allows. Christopher meets Blythe backstage and shows her some footage intended for airing to Blythe, pointing out that she's "even more Judi Jo Jameson than Judi Jo Jameson herself." Blythe sees herself throwing a fit at Judi Jo onscreen and realizes the pageant got to her head. She sees Princess Stori running into the room with a furious Judi Jo in hot pursuit. Princess Stori hides behind Blythe, and Blythe tells Judi Jo that Princess Stori doesn't want to be in the pageant circuit anymore. After a moment of speechless rage, Judi Jo promptly decides to abandon Princess Stori, who immediately leaps into Philippa's loving arms.

When Christopher is about to declare the winner for Terriers & Tiaras, all of the dogs see Princess Stori and Zoe taking on the obstacle course and leave the stage to follow them. This leaves Russell as the only creature left, who wins the pageant by default.