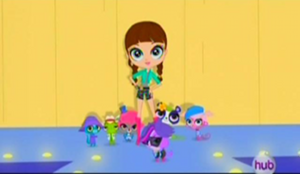 "Oh my, Blythe, you're the bee's knees! And your designs are a big hit too! You need to go out and take a bow!"
Written by Julie McNally Cahill & Tim Cahill

Picking up immediately where "Part 1" left off, the pets cheer behind Blythe as Roger drives her to school, putting additional pressure on her. Right after Blythe arrives at school, Brittany and Whittany Biskit get dropped off in a limousine by their father, who turns out to be the owner of the Largest Ever Pet Shop. Unable to open her locker, Blythe receives help from three friendly classmates: Jasper Jones, Sue Patterson, and Youngmee Song. They become friends from their mutual dislike of the Biskit Twins as Jasper, to much effort, successfully opens Blythe's locker. Sue and Youngmee explain that The Littlest Pet Shop used to be popular, but The Largest Ever Pet Shop had been siphoning people away and that Littlest just couldn't keep up.

Meanwhile, Russell sets up a brainstorming session as to how to gather enough funds to keep the Littlest Pet Shop in business. Zoe, Pepper, Vinnie, and Sunil suggest performances, but Russell turns them down.

At the lunch table at school, Brittany and Whittany offer Blythe one more chance to join their table, but Blythe, having found new friends at school, decides to stay with Jasper, Sue, and Youngmee. The Biskit Twins, having never witnessed such audacity in their lives, declare themselves enemies of Blythe. Whittany ruffles through the "Blythe Style" sketchpad, tearing out pages, and drops the book on the floor. While briefly dismayed, Blythe gets an idea of how to save the Littlest Pet Shop.

After a brief Imagine Spot of the Largest Ever Pet Shop taking over The Littlest Pet Shop, Blythe returns to Littlest and speaks with Mrs. Twombly about what she plans to do: Using the wardrobes she designed and kept in "Blythe Style," Blythe will create pet clothes unique to The Littlest Pet Shop and showcase them with the day care pets as a fashion show. With cooperation from the pets, Blythe readies her outfits and puts up advertisement posters everywhere. This catches the attention of the Biskit Twins, who vow to destroy Blythe AND The Littlest Pet Shop.

Turnout for the fashion show is spectacular—but this is because the Biskit Twins wrote "Free Money" on all of the posters. Mrs. Twombly is forced to say that there is no free money, and people leave in droves—but before they can go far, Blythe abruptly begins the fashion show. The pets' outfits combined with their talents (and the lights and laser show to go with it all) impress everyone nearby so much that they stick around anyway. Everyone except the Biskit Twins, who sneak to the top of the stage with a bucket of chocolate fudge and a bucket of kitty litter and wait for Blythe to appear onstage so they can dump the buckets on her. Russell notices the kitty litter sprinkling from above and makes his way to the top to see what's going on. He quickly figures what the Biskit Twins are up to and charges at them, frightening them off the top and onto the stage, where their own buckets fall on them. Defeated, the twins make a break for it and stop disturbing Blythe for the time being.

The following day, The Littlest Pet Shop is stocked with Blythe Style pet clothing, which, thanks to the fashion show, is a massive success, putting The Littlest Pet Shop back in business. Roger drives by, sees the line going out the store, and turns to the camera asking, "Did I miss something?"