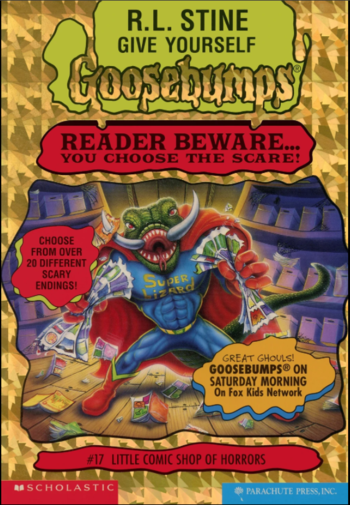 The Give Yourself Goosebumps book where you enter the world of comic books.

You're a massive fanboy of comic books who, returning home from a meeting of your school's comics club, come across a shop called "Milo's Comics Dungeon". Strange, you don't remember seeing this shop a few days ago. But you decide to enter anyway, and its proprietor — Milo the mutant — doesn't want you to leave.

Which way will you go? Browsing through the comic aisle will have you transported into the world of comic books — which suspiciously resembles the comic book world from DC and Marvel from the real world — while choosing to go downstairs, ignoring a sign telling you to stay away, will lead you to a literal dungeon.