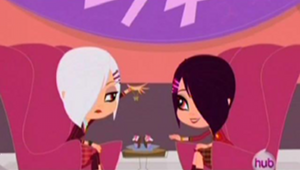 "Whittany, a necklace just, like, fell out of this cupcake." "That is so random." "Totally random."
Written by Merriwether Williams

On a Friday after school, Sue invites Jasper and Blythe over to hang out in the park, though Blythe is momentarily sidetracked as Roger stops by to pick her up. Roger presents to her a butterfly-shaped pendant—Roger took one of Blythe's designs and had it custom-made by a jeweler.

Meanwhile, the Biskit Twins agree to get some dessert to unwind and stop by Sweet Delights. While in there, they get the idea to set up a party, and they start texting each other two feet from one another as Youngmee stares in confusion. Brittany realizes that they don't have a reason to throw a party. When Whittany says it's three months until their half-birthday, Brittany decides the day should be their quarter-birthday party. Brittany requests 200 cupcakes by the following day, and Youngmee accepts. On their way out, the Biskit Twins bump into Blythe, causing them to drop their coffee. Because of that, they uninvite Blythe to their quarter-birthday party. Blythe, having no idea what just transpired, just brushes it off. Somewhat mystified at Blythe's nonchalance, they hop into their limousine to uninvite more people. The pets overhear it all from the kitchen, however. Pepper, in particular, takes offense at Blythe getting uninvited.

Youngmee tells Blythe that she needs to make two hundred cupcakes, and Blythe brings Jasper and Sue over to help out. During it all, Minka looks down from above and sees the pendant, enamored at its shininess. Youngmee, Blythe, Sue, and Jasper work into the night to make the cupcakes. Blythe, having lost her coordination, unknowingly drops her pendant into the batter in the mixer.

The next morning, Minka wakes Blythe up to see the pendant. Upon realizing it's not around her neck, Blythe checks all over her apartment, to no avail. Penny says she and the pets looked around the pet sop while Buttercream scrutinized Sweet Delights, but they couldn't find it either. Blythe concludes that she must have dropped it in the batter, and she heads to Sweet Delights to ask Youngmee to bake two hundred more cupcakes so Blythe can go through the ones made the previous day and find the pendant. Youngmee is initially hesitant but goes through with the task anyway. Unfortunately, Youngmee is just as sleepy as Blythe, and the cupcakes come out sloppy. They don't notice the difference, however and ready the cupcakes for delivery.

At the Biskit Mansion, the original batch has already arrived at the party. Brittany brings one over to her little corner and shares it with Whittany. As they tear it in half, however, Blythe's pendant falls out of it. They interpret it to be a present from their father and assume there must be more presents in the other cupcakes. As they think about getting more, they see Blythe and Youngmee replacing the previous batch with the new one and interprets the situation as Blythe sneaking in to eat all of the cupcakes. Blythe blurts out a lack of "ulterior motives" for what she and Youngmee are doing, and the Biskit Twins assume that Blythe is after the supposed gifts hidden in the cupcakes. Whittany and Brittany tugging the cupcake cart back and forth with Blythe and Youngmee to claim the old cupcakes for themselves lodges open the bottom compartment, where the pets were hiding.

One of the cupcakes rolls off, and its sprinkles sparkle in the party lights. Minka wanders off to go get the cupcake, prompting all of the other pets to leave the cart to find her. Minka proves too quick for them, and all of the pets stumble around on the dance floor. A partygoer notices Vinnie and Zoe, and the party breaks out into a panic. The security guard attempts to do crowd control but gets flung into a fountain with a shark in it. The shark bites him in the face, and he runs around screaming in pain, knocking over the cupcake cart and thus ruining all four hundred of them.

The pets return to Blythe and tell her that they're going to stomp on all of the cupcakes until they find the pendant. As they do so, the filling in one of the cupcakes Vinnie stomps lands on someone's face. In retaliation, he throws a pizza at a random person. Soon, everyone is throwing food at each other and screaming. The Biskit Twins confront Blythe saying that it's her fault, to which Blythe admits she's just looking for her pendant. Whittany holds it up showing that they have it, and Minka, consumed with rage, agilely retrieves it and gives it back to Blythe. Blythe, Youngmee, and the pets walk out, leaving the Biskit Twins to themselves in a ruined room with panicked people.

Back in Blythe's room, Blythe and Youngmee chat about how terrible the day was. Jasper and Sue drop by, however, ready to bake a cake in celebration for the meeting of the three of them. Blythe and Youngmee collapse onto the bed, having had enough of baking for the while.