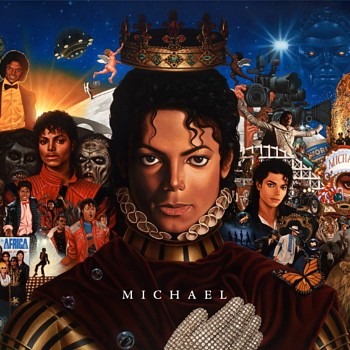 Michael is the first posthumous album and eleventh album overall by Michael Jackson, released in late 2010.

For a time after being acquitted of several child abuse charges, there were rumors that Michael was working on a comeback album and preparing for a world tour. Between 2005 and June 2009, MJ had recorded and produced several songs, some unfinished, with will.i.am of The Black Eyed Peas, James Porte and Eddie Cascio, and was preparing for a 50-show concert series in London's O2 arena titled "This Is It".

Tragically, Michael died from an overdose of Propofol and benzodiazepine on June 25, 2009, putting a premature (and permanent) end to his plans.

Inevitably, with the sales of Jackson's discography skyrocketing shortly after his death, his estate made plans to release a selection of the tracks he recorded between 2005 and 2009, as well as others recorded between Thriller and Invincible. Dangerous producer Teddy Riley was brought on to remix several of the tracks, alongside Neff-U, Tricky Stewart, and Eddie Cascio himself. will.i.am. objected to the plans, and blocked the estate from using the tracks he recorded with Michael. Also, Sony released an early version of the album art that featured Prince's "Love Symbol", starting speculation that the Purple One had lent his talents to the album's development, but was immediately denied by his camp. Sony scrubbed the symbol from the album art soon after the response.

On release, Michael was met with mixed reviews from critics, and controversy from fans over the authenticity of some of the album's tracks. "Breaking News," "Keep Your Head Up", and "Monster" were recorded in the basement of Eddie Cascio's house during Michael's stay there in 2007 and are credited to him, Cascio and James Porte. Many MJ fans have claimed the vocals on the Cascio tracks were not genuine and were recorded by an impersonator (the popular target being Italian-American R&B artist and MJ soundalike Jason Malachi). Teddy Riley, who remixed three of the Cascio tracks, said the vocals were authentic, but were distorted due to heavy use of Auto-Tune and Melodyne. This did nothing to appease the fans, to the point where one filed a class action lawsuit

that went all the way to the California Supreme Court, and Riley himself eventually backed down and apologized for working on the album, claiming that he was "set up"; all of which eventually resulted in the alleged fake tracks getting pulled off music services

in June 2022 by Sony. Sony and the Jackson estate initially denied hiring an impersonator, but later claimed they didn't know, and that their claim that the vocals were genuine were protected under the First Amendment. On August 18, 2022, the lawsuit was mutually settled; however, the courts ruled that Sony was still at fault, stating

that their First Amendment defense didn't override consumer protection when it came to "an explicit promise of a superstar's vocal contributions to a product".

* Tracks that were removed from the album on June 2022.