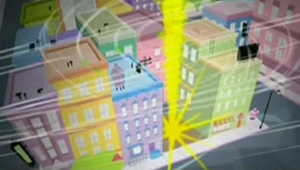 "That does it! A curse upon the Littlest Pet Shop!"
Written by Evan Gore & Heather Lombard

In the day camp, Penny Ling announces to Russell that she is no longer on speaking terms with Pepper. Being the mediator of the bunch, Russell turns to Pepper, who says that she finds amusement in the way Penny walks. Pepper then points out that everyone has a personal quirk she finds funny, then proceeds to disrupt Minka and Zoe as a demonstration. When Russell tries to direct her hurtfulness back at Pepper, however, Pepper points out that Russell has the most quirks she finds funny.

At the front room, someone has dropped off Dolores, a slow loris, and Mrs. Twombly feeds her snacks. Blythe and Mrs. Twombly fawn over her adorability, but Dolores just stares angrily back as she eats, eventually snarling back at Blythe and Mrs. Twombly, frightening them. Nevertheless, Mrs. Twombly calms down right afterwards, and Blythe decides to figure out what's making Dolores cranky. Blythe picks Dolores up, and on her way to the day camp, Dolores tells Blythe that she hates being stared at. When Blythe starts chuckling at Dolores's high pitched and squeaky voice, Dolores grows angrier, demanding not to be laughed at. Taking that to heart, Blythe introduces Dolores to the other pets and trusts them not to laugh at her—upon which all of the other pets turn to Pepper. Not long after Pepper comes down from the armchair that she starts snickering at Dolores's name. Blythe reminds Pepper not to laugh at Dolores—while Pepper complies, she is barely able to avoid bursting into more laughter.

Later, all of the regulars stand there watching Dolores eat. Pepper comes up from behind Dolores to greet her, but when Pepper hears Dolores's voice, she starts to crack up. Russell and Penny take Pepper away before she can cause any trouble while Sunil distracts Dolores with more pet chow. Somewhere else in the room, Russell and Penny call Pepper out for not following Blythe's instructions and exascerbating Dolores's bad mood. Pepper reacts unapologetically to the whole affair, so Russell warns Pepper that he will keep a watchful eye on her. Meanwhile, Sunil tells Dolores that he will try to make sure her experience is as good as possible and to give her the space she needs. When Dolores voices her approval, all of the pets, save Russell, start snickering. Dolores gives increasingly threatening warnings, though the pets continue to laugh. Knowing that she wouldn't get through to the pets, she recounts her days of terrorizing the other animals in the Jungle of Tamango with her curses. Suddenly, Zoe desperately has to go outside. Blythe enters the day camp to tell the pets that Mrs. Twombly will be away for some time and that Blythe must run the store. Zoe tells Blythe she really needs a walk, and Blythe complies, leaving the store unattended.

With no humans at the store, Pepper decides to try to get Dolores to laugh. She fails to get even a chuckle and instead gets Dolores soaking wet. Russell, watching from afar, can't help but laugh long and hard, and while Sunil and Vinnie cover his mouth to try to stop him, Dolores has already heard the laughing and inflicts a curse upon the Littlest Pet Shop that shrinks the building down to the size of a dollhouse. The pets step outside, in shock at their smaller size. Minka asks Dolores if this was her doing, and Dolores proudly proclaims responsibility, deeming it punishment for laughing at her. Minka points out that Dolores shrunk herself too, but as soon as it dawns upon her, bugs start closing in on the pets, and they run back in as an ant chases them, save for Dolores, who hdies behind a rock.

The ant is soon scared off by Alice, who mistakens the shrunken building for a dollhouse. She picks it up and takes it home, accompanied by her apathetic mother as Dolores, who did not run back inside in time, can only watch. Along the way back, Minka and Vinnie accuse Russell of having put them into this mess, but Russell retorts that he didn't do the shrinking. This does not make the pets any less angry, so Russell takes it upon himself to try to find a solution once Alice puts the building down.

Blythe returns from Zoe's walk, but she sees the building is missing. Zoe, suspicious, starts sniffing along the floor and spots a tiny Dolores. Blythe picks her up and asks Dolores what happened, and Dolores gladly confesses to putting a curse on the Littlest Pet Shop and that Russell was the one who laughed. Blythe asks about the nature of the curse, so Dolores tells her that the building will return to full size in one hour and that a little girl she cannot identify took the building away. Zoe takes up the task of locating the pets, and having found a lock on their scents, especially Pepper's, she dashes over to a building down the street.

By then, Alice has returned to her room and sets the building down on a table. She marvels at her "dollhouse's" realism but regrets that the front door is too small to easily reach the pets. With Alice continuing to jostle the building around, the pets grow desperate to undo the curse. Russell figures to find Dolores, but she is nowhere in sight. With the situation hopeless, Penny bursts into tears.

Zoe follows the scent trail to the front of the building, and when Blythe opens the door to let Zoe in, Zoe continues to track down the scent to a door on the third floor. Turning down an offer by Dolores to put a shrinking curse on the door, Blythe knocks and gets Alice's mother. Although Blythe initially pretends to fundraise for her school, Zoe wastes no time scurrying into the residence and to Alice's room's door. Blythe finds Alice and tries to persuade Alice to give the building back, but Alice puts up a lot of resistance. Meanwhile, the pets recognize Blythe's voice and Zoe's barking.

As Blythe attempts to negotiate with Alice, a breeze drifts through Alice's open window, which Dolores warns is a signal that the curse will wear off soon. Without any time to lose, Blythe picks up the building and tries to walk out, but Alice intercepts and takes the building, running outside with Blythe and Zoe giving chase. Alice trips on a sidewalk crack, flinging the tiny building up into the air, but Zoe dashes ahead and catches it on her belly. Alice retaliates by throwing a stick for Zoe, nabbing the building as Zoe lets go. Blythe gets Zoe to re-focus on Alice and the building, and they find her around a corner, where Alice tells Blythe that she does not want to let the building go because she lost her Princess Precious (whom she calls Vinnie after having captured him previously) and doesn't want to lose something else she found. Blythe reassures Alice that she knows who this Princess Precious is and that she'll allow Alice to come over and play with him any time she'd like. Initially hesitant about how Blythe could know who Princess Precious is, both notice the storm intensifying, now bearing dark clouds and lightning, and Alice agrees and runs home before the weather gets worse. With Blythe to herself, she takes the building and places it in its proper location, seeing Mrs. Twombly returning, albeit struggling to walk in the strong winds. Blythe lifts Dolores out of her shirt pocket, and Dolores runs inside as quickly as she can. With everyone excited to see Dolores, the building returns to its normal size and fills up the space it once occupied.

Mrs. Twombly walks up to Blythe just as the building is fully restored, having not noticed a thing besides the windiness. As Mrs. Twombly steps in, she sees the store has become a mess and that the cash register is still tiny. Blythe, attempting to find an excuse, gets a pumpkin for a head. Mrs. Twombly's head is in turn replaced with a fish and Zoe's with a gigantic eyeball.

At that moment, Russell takes Vinnie out of his trance and back to reality. Russell asks if Vinnie thought about what would happen if Dolores put a curse on everyone, ansd Dolores, having overheard it, admits that she's never successfully inflicted a curse before. Regardless, Russell apologizes to Dolores but gets repeatedly interrupted by Pepper laughing. This time, Pepper tells Dolores not to get too upset over it because it's what makes her special, which Dolores accepts. Blythe then walks into the day camp and introduces the pets to a girl who's been wanting to visit for a long while: Alice, from across the street. Vinnie immediately recognizes her and curls up on the floor in terror.