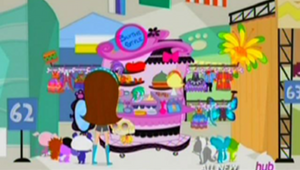 "You've come a long way; you're finally here. Show them what you've got 'cause there's nothing to fear."
Story by Julie McNally Cahill, Tim Cahill, and Adam Beechen
Teleplay by Adam Beechen

Without the scooter's trailer hitch to bring the kiosk to the International Pet Fashion Expo or any spare tires to replace the flat ones on the Littlest Pet Shuttle, Blythe has to resort to digging through a nearby garbage can in panic, regretting not getting a spare hitch. Mrs. Twombly sees the problem, offering Blythe one of her doorknobs from her collection that can fit on the back of Blythe's scooter and, with a blowtorch, quickly welds it, allowing Blythe to bring the kiosk to the expo.

Along the way, Russell expresses his nervousness over being in front of a camera to Zoe. Zoe advises Russell to use the "Glamor Glare," a modeling pose that cannot fail. Russell gives it a try but hurts an eye doing so, so Zoe just tells him to give it more practice. As they chat, Blythe's scooter overtakes the Biskits' limousine. Whittany and Brittany, seeing Blythe pass by, demand LeGrande drive faster and remind him that he'll need to play his part in the next phase of their scheme once they reach the expo.

Blythe arrives at the expo with a few minutes to spare and places her kiosk at the space designed #62. As soon as she parks it, Vinnie expresses his anxiousness at wandering around the place, but Sunil warns him that doing so can get Blythe in trouble. It doesn't take long to notice Blythe's nervousness, but the pets reassure her that with the effort she's gone through to get to the expo, things will turn out okay while helping Blythe assemble and decorate her kiosk. As soon as they're done, however, Blythe is asked to go to the Africa pavilion. Initially wondering why she's sent there instead of the Moscow pavilion as was asked, Zoe reminds Blythe that Mona hasn't always been consistent in her words. Before heading off, Blythe shows the pets that she's converted a chamber inside the kiosk into a lounge room for the seven of them. They hop inside, minus Russell, and Blythe dashes away. The Biskit Twins then reach Blythe's kiosk and discuss how they intend to steal it when no one is around.

Blythe reaches the Africa pavilion and sees LeGrande, dressed like a photographer. Blythe asks him, not seeing through the disguise, why Mona isn't present. LeGrande invents the excuse that she's late, which provokes Blythe's suspicion. Simultaneously, Vinnie gets so anxious that he leaves the kiosk, with the other pets tasking Sunil to tail Vinnie so he doesn't get into too much trouble. With them out of the way, Minka starts succumbing to her claustrophobia, and before she can leave too, the Biskit Twins close the door and shove the kiosk somewhere else with her, Penny, Zoe, and Pepper inside. Sunil spots the twins pushing Blythe's kiosk and notifies Vinnie, and they both tail the twins.

As LeGrande continues to take photos of Russell, Blythe receives a call from Mona Autumn demanding to know why Blythe is not at the Moscow pavilion. Blythe attempts to explain that she is with a photographer at the moment, but she simply infuriates Mona further, and Mona terminates the call before Blythe can properly apologize.

Blythe arrives at the Moscow pavilion, but because she didn't arrive on time, Mona berates Blythe for being late and moves on to her next appointment. Elsewhere, Vinnie and Sunil look for the person doing the announcements over the P.A. system but come across Delilah. Delilah offers to lead the two of them to the announcer.

Having been rejected by Mona, Blythe heads back to the kiosk. Russell calms Blythe down with the idea that, even if Blythe cannot be on the cover of Trés Blasé magazine, she can still gain reputation through the kiosk. Unfortunately, Blythe returns to space #62 to find it's entirely vacant. Russell notices a trail of bamboo snacks left by Penny Ling, however, and follow it to an intersection, where it ends. At that point, Blythe finds Emma, Jasper, Sue, and Youngmee, who have all come to the expo to see how Blythe is doing. Blythe has just enough time to lament to them of her situation.

Delilah heads into the room with the announcer, goes up to her sheets containing her lines, and makes off the entire stack. The announcer gives chase, allowing Sunil and Vinnie access to the room. Not knowing what to say, Vinnie puts Sunil in front of the microphone and asks him to send a message to Blythe. Sunil's inablility to speak prompts Vinnie to step up himself and make a direct address to Blythe to go to the specific storage closet where they saw the Biskit Twins take the kiosk. Blythe goes over and opens the closet, only to find empty space. By this time, the twins have already moved the kiosk to space #18, which was either unused or designated for them. They put their own sign with their names over the Blythe Style logo to claim it's theirs and stand by for judging.

The judges arrive, the head judge being Mona Autumn. Impressed, Mona asks about the twins' inspiration, upon which Whittany starts rambling with Brittany following along. Blythe overhears Whittany on the P.A. system and sees the Blythe Style kiosk on a television screen. Identifying space #18, Blythe scrambles over with Vinnie, Sunil, Delilah, and Russell just in time to stop Mona from giving the twins the 1st-place ribbon. To prove that the kiosk belongs to her, Blythe explains her inspiration for each of the outfits on a rack, then opens the compartment to bring out Minka, Penny, Pepper, and Zoe, who all run up to her in sheer affection, with Minka lashing out at the Biskit Twins.

In addition, LeGrande steps up, whom Blythe identifies as the photographer for Russell. Mona says that she's never seen him before, so LeGrande removes his disguise and admits that he was ordered to distract Blythe so the twins could take the kiosk. When asked why he follows along in their schemes, LeGrande says that his family has served the Biskits for at seventeen generations but that they value honesty—hence, his ruse brought him to his breaking point. With this confession, Brittany fires LeGrande, but Mona discovers he is actually a very good photographer and offers to buy the photos of Russell taken during the expo. Mona also lets Blythe know that Fisher Biskit repeatedly talks about opening another store as a scare tactic for his competitors but never actually follows through. With what she's seen, she hands the award to Blythe, with Emma, Jasper, Sue, and Youngmee emerging from the crowd to congratulate her and Roger ecstatically leaping over.

Blythe wheels the kiosk over to a more open area of the expo, having dressed the pets in her outfits. They emerge from the kiosk to be photographed by LeGrande and Mona's personal photographer, one of the pictures winding up on the cover of Trés Blasé.