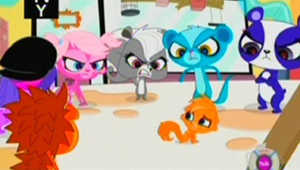 "It's not stealing. It's gathering!"
Written by Evan Gore and Heather Lombard

Mrs. Twombly steps outside to find the weather so nice, she props the door to the pet shop open with a chair, inadvertently letting a lot of the local wildlife in, including a squirrel. Blythe runs around getting all of the animals out of the store and has to personally deal with the squirrel.

Later, Mrs. Twombly reads a driving handbook without her glasses and can't make sense of it. She realizes her glasses are missing but decides to continue manning the store without them. Blythe, aware of the trouble this can cause, searches for the glasses by herself. Blythe tries the dumpster and meets up with the squirrel from before, who chastises her for dismissing some of the items in the trash. As he talks about feeling cold but lacks a name, Blythe calls him Shivers and heads back to Mrs. Twombly and lets her know they're not in the dumpster. Mrs. Twombly suggests going to Sweet Delights next door, as she visited there that morning. Blythe heads there with Shivers following, though Shivers is too small to open the door and is trapped outside. When Blythe asks Youngmee if they've seen Mrs. Twombly's glasses, she excitedly calls in her aunt Christie, and the two of them break into a song and dance number about what they've found in their lost-and-found box (appropriately called "Lost and Found Box"). Blythe is momentarily distracted by this song but finds out Mrs. Twombly's glasses are not in it. Blythe once again tells Mrs. Twombly that her glasses are not there.

Shivers sneaks into the day care room, claiming himself to be Blythe's pet she keeps at home. Despite everyone's suspicions, they give him the benefit of the doubt, and he takes everyone's food, water, and other amenities to himself. Blythe walks in, notices Shivers, and remembering Shivers's experience in going through piles of things, asks for his help in finding Mrs. Twombly's glasses. When Blythe leaves, the other pets share their resentment of Shivers. Vinnie, Penny, Minka, and Zoe all realize one of their possessions has gone missing. They start blaming each other, then blame Sunil as he walks by because he's constantly trying to make things disappear with his magic. Sunil points out that his magic wand had gone missing, rendering him unable to disappear anything. As they argue over who took the items, Pepper points out that it's most likely Shivers.

Mrs. Twombly sets out to look for more supplies without her glasses. She picks up Shivers as her purse, which Blythe quickly corrects, and struggles to even get out the door. Blythe returns to the day care room holding Shivers and sees all seven of The Littlest Pet Shop regulars mad at her. Pepper claims that Shivers has been freely stealing things from everyone (with the not-so-notable exception of Pepper herself). When Blythe reassures the pets that they're worrying too much, Shivers goes missing. Zoe tracks Shivers down through smell, and they find Shivers on the ceiling. Pressed and cornered, Shivers desperately makes up stories to try to clear himself when the missing objects start dropping down from the ceiling. Shivers admits he's been stealing things from around The Littlest Pet Shop and shows Blythe his stash in the attic, which he has since filled up with random objects. Blythe searches around but doesn't find Mrs. Twombly's glasses among them.

No longer welcome in The Littlest Pet Shop, Blythe brings Shivers to the park. Blythe tells him he can find squirrel friends and naturally gather things here. Shivers nervously tells Blythe he'll give life in the park a shot and scampers off. At the pet shop, the pets bring the objects in the attic back down, only to find Shivers has returned and taking them back. The pets call for Blythe, and she repeatedly drops Shivers back at the park, only for him to find ways to return to The Littlest Pet Shop. Eventually, Pepper tells him that he needs to find a home at the park, and Shivers points out he does have one there.

Blythe and Pepper go to the park to see Shivers's home, a hollowed tree. Pepper hops in only to see that he has an even bigger stash of stolen objects in the tree with barely even a place to stand. Blythe brings in a trash can to toss out all of the unnecessary things in the tree. Shivers is initially horrified to see this but is comforted in Pepper telling him that this is a natural extension of squirrels storing things for the winter. When Blythe finishes, she gets her head stuck in the tree. Shivers climbs back into the tree and, amazed at seeing how open his home is now, helps Blythe get unstuck. Pepper and Blythe assemble a proper home for Shivers with furniture and a bed. Shivers likes the renovations so much that he chooses to stay in the park from here on out.

Blythe returns to The Littlest Pet Shop to find out that Mrs. Twombly has passed her driving test: Mrs. Twombly says that she found her glasses in her purse…along with a lot of acorns.