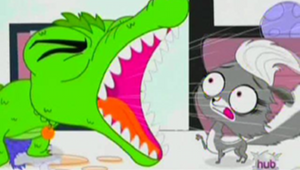 "Eats and sleeps just like everyone else, huh, Zoe?"
Written by Adam Beechen
Advertisement:

Roger informs Blythe that Mona Autumn, a critic for Tres Blasé magazine, will make a critique of Blythe's pet backpack she designed over the summer, unaware that Mona has a knack for verbally destroying anyone she dislikes. Blythe knows, however, and the news fills her with dread. Meanwhile, the day camp gets a temporary new member: Wiggles McSunbask, an alligator who, after emerging from his pet carrier, immediately trips all of the regulars with his tail and walks away.

Ignoring Wiggles for the moment, Zoe and Minka find themselves embedded inside a pile of rejected designs of Blythe's—finding out Mona will be coming that afternoon, she frantically comes up with designs but keeps coming up short for Mona's expected expectations, not satisfied with the backpack she came up with during the summer. A worried Roger peeks in and offers Blythe some fresh air to clear her head.

The moment Blythe steps out, however, Wiggles re-emerges from his corner and starts wrecking everything in sight. Russell grumbles about Wiggles's behavior, so Penny Ling tries to politely introduce herself. She finds him tearing up a teddy bear, however, and with a roar, Wiggles scares Penny into retreating back with the other pets. Undeterred, Pepper and Vinnie take their turns but are left cowering far away as well. Russell, realizing that getting through to Wiggles is too difficult for any one of them to do, proposes doing so together as a team. When they're huddled together, however, Wiggles draws a circle around them, declaring they never step out from that circle or he will assault them. The seven regulars stand shivering in the circle as Wiggles walks off free to do as he wishes.

Roger attempts to calm Blythe down by telling her to imagine Mona in a moose costume. However, Blythe remains a nervous mess by the time she reaches the waiting room. Despite some words of advice from Cairo, Mona's sphinx cat, Mona rejects Blythe's backpack designs in short order, advises her to pick a career choice other than fashion, and asks her to leave. Blythe, discouraged, walks off.

Back at the Littlest Pet Shop, the pets are all struggling to fit within the circle. Minka accidentally leaps off the line and catches Wiggles's attention, but before he can do anything to her, Blythe walks by forcing Wiggles to halt his attack. The pets plead and beg at Blythe for help, but she is too down to notice them and heads straight to the dumbwaiter. Blythe tosses her sketchbook in the wastebasket, but when Roger finds out Blythe did not show Mona the pet backpack design and that Mona called her submissions unoriginal, he correctly assumes that Blythe made designs to specifically please Mona. He tells Blythe that if Blythe herself is not satisfied with what she makes, then neither would Mona and not to give up on something after one setback, taking the sketchbook out of the wastebasket and giving it back to her. Feeling refreshed, Blythe heads back down the dumbwaiter with the backpack—now too excited to pay attention to the pets and heads right out.

Without Blythe's help and spotting Wiggles asleep, Russell gathers the pets to build a wall of cardboard boxes and wooden boards surrounding Wiggles. Russell wakes Wiggles up and declares that this is his new territory. Wiggles proceeds to knock down the wall with no effort—and the pets standing atop the wall with it. In the process, Wiggles gets the idea of forcing the regulars to build him a fort. As they build it, Penny accidentally breaks a food bowl. Wiggles berates her, making her cry. At this point, Zoe has had enough of Wiggles and yells at him, telling him she won't put up with him anymore and that she is prepared to take any punishment from him. When asked what he'll do about that, Wiggles's eyes wells up and he starts to cry too. Zoe, not convinced his sadness is genuine, continues to berate him, but Wiggles says that no one has ever stood up to him before and doesn't know how to react when that happens. Pointing out that his scary appearance has given him difficulty making friends and that acting mean has been his only way to feel good, Russell and Sunil step up and offer him their friendship.

Blythe storms up to Mona's waiting room and waits without an appointment, hoping for someone to be late so she can snatch their spot. She makes this known to the secretary, who puts on a helmet and prepares for the worst. When Blythe catches Mona emerging from the door, she chases Mona, carrying Cairo, to an elevator and throws the backpack she designed into it. Blythe heads to a flight of stairs to catch Mona emerging from the elevator, now delighted to see Cairo has accepted the backpack. Mona whispers in Blythe's ear that she only acts mean to ward off sycophants and not only likes the backpack, but requests one for herself to use. A delighted Blythe returns to the Littlest Pet Shop to see the pets working together with Wiggles to build a fort and to give Roger a hug for his encouragement.