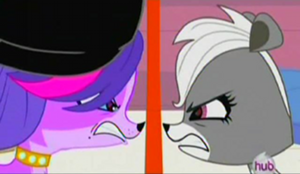 Upon hearing Penny's one-year anniversary at The Littlest Pet Shop is near, Pepper and Zoe both decide to host a party. However, after Blythe suggests for the two of them to work together, they dash off in opposite directions.

Blythe, left to groom Penny, excitedly anticipates how great the party will be with Zoe's sense of style and Penny's flair for fun. Vinnie overhears this conversation and announces his joining in with a dance number. As he's performing it, he collides with a stack of pet food cans and loses his tail when he emerges. Blythe tries to calm him down by looking it up online and letting Vinnie know this is common among geckos. Unfortunately, Vinnie continues to panic when he realizes he pulled off his own tail in the confusion, telling the others that his tail gives him balance when he dances. Russell tries re-attaching the tail, but it crumbles to dust the second he picks it up, sending Vinnie into tears. Russell begins searching for a doctor when Sunil blurts out that his parents wanted him to be a doctor. To Russell, this is close enough, and Russell drags Vinnie and Sunil elsewhere.

Zoe emerges into the day camp room dressed like an aristocrat and Pepper like a rodeo clown. Blythe notices something wrong instantly and questions if they're truly working together as she had hoped. Blythe asks Pepper what she intends to do, and Pepper describes a hoedown with lots of laughs, a rubber chicken rodeo, and throwing pies at Zoe. Before Penny can offer her words on Pepper's idea, Zoe butts in and describes her "High Societea" idea, an elegant tea party where everyone dresses in fine outfits, everything matches, and Pepper sits atop a dunking booth. Zoe and Pepper ask Penny whose idea she likes better. Penny is too timid to say anything worthwhile, so Blythe steps in and says they're both great. Each takes Blythe's words to mean that Blythe liked her idea better, and they each take off in opposite directions again.

Russell and Sunil try attaching a drinking straw, a chocolate wafer (with Buttercream's suggestion), a pencil, a tape measure, and a bottle of soda, all of which end in disaster.

In Blythe's room, Zoe and Pepper arrive, one after the other, requesting wardrobes for their parties. Each time Blythe asks if either ran her ideas through the other, they hastily change the subject and return to the day camp room. Vinnie heads to Blythe's room too, depressed that all the tail substitutes have failed. Blythe asks if Vinnie had even tried dancing since his tail got detached, to which Vinnie gives it a shot and gets overjoyed that he dances even better without it.

By now, Pepper and Zoe have divided the room in half, with a big red line down the middle. Vinnie dances right on the demarcation showing his neutrality, to which Pepper and Zoe now want Vinnie to themselves. With the party about to start, Blythe arrives, who is not happy with Pepper and Zoe. When Penny enters the room Pepper and Zoe fight over where Penny should be and quickly degenerate into squabbling. Rejected, Penny retreats into the pet slide, to which Blythe steps in and makes Pepper and Zoe play a game about saying good things about each other. They both admit jealousy for each other and realize they forgot about Penny. Having come to terms, they ask Penny which party she'd like to go to and that they'll both be fine with her decision, to which she chooses both.

Meanwhile, Vinnie's tail has grown back, and he is once again down. Penny comforts Vinnie saying that his dancing was good before he lost his tail, and overjoyed, he starts dancing again—he's constantly tripping, but he always gets back on his feet and keeps going.