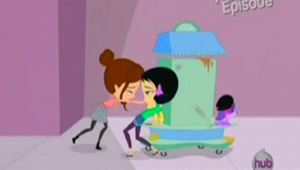 "It's a super-cool convention and the kind of thing I really want to do but I have to set up my own business in order to get in and I'm thinking of buying a sales kiosk for my pet clothes that's gonna cost money. But don't worry about it because I got everything figured out and I promise my grades will stay good!"
Story by Julie McNally Cahill, Tim Cahill, and Roger Eschbacher
Teleplay by Roger Eschbacher

As Blythe and the pets clean her scooter, Jasper, Youngmee, and Sue drop by to ask Blythe if she'd like to hang out at the mall. Blythe instead notices an advertisement on the back of Youngmee's magazine for the Pet Fashion Expo and jumps in joy that it's coming to Downtown City. Youngmee points out that the expo is only open to designers with their own shops, so Blythe starts pondering about how she could do that. She reassures the pets that she won't leave them behind, as she will need their help.

After some discussion with the pets in the day camp room, Blythe decides on a kiosk, which she can keep at the corner of the Littlest Pet Shop as a separate business. Roger leaps into the room with his own ideas, however: At a corporate meeting regarding plummeting ticket sales at the airline company he works for, he suggests a plane dedicated to transporting pets, which they accept, assigning Roger to the Pet Jet. The pets are delighted to hear such a concept and immediately head into a musical fantasy sequence. As the song ends, they go into a follow-up Imagine Spot regarding a blinking red light that pilots Russell and Penny assume is a malfunction on the plane—after Penny makes an emergency landing, it turns out to just be a microwave oven finished heating Russell's popcorn.

Back at the Baxter apartment, Blythe and Roger enjoy some milk and cookies as Blythe asks Roger for help setting up a store so she can visit the Pet Fashion Expo. Before Roger can utter much, Blythe thanks him and heads out with Youngmee and Zoe to look for thrift shops with used kiosks to buy. They instead buy several bags of clothes (including some for Zoe) but cannot find a kiosk. Zoe, however, sniffs out the One Last Chance Thrift Shop, where a used kiosk is available for $250. Not possessing that much money, she exits with her head hung low when the store owner offers to give her the kiosk in exchange for Blythe's scooter. Blythe accepts, and the two of them start a long trek back to the Littlest Pet Shop pushing the kiosk all the way.

As they push the kiosk through Downtown City, one of the wheels snaps off as they make their way in front of the Largest Ever Pet Shop. Blythe calls Mrs. Twombly for help but finds Brittany and Whittany Biskit staring her down. Blythe explains to them what she'll do with the kiosk, which the twins accept as a challenge. Before the twins can taunt them any further, though, Mrs. Twombly arrives with the Littlest Pet Shuttle, effortlessly reattaches the wheel, hitches the kiosk to the back of the shuttle, and takes Blythe, Youngmee, and Zoe back.

Blythe moves the kiosk to the alley behind the building, where she and the pets refurbish it. Once it's finished, Roger stops by to take a look and asks if Blythe wants to see the Pet Jet. Blythe dodges the issue of where her scooter had gone and asks Roger to take her to the airport instead, which Roger accepts due to the distance. Once there, Blythe and the pets are overjoyed to see the plane.

While inside, Roger gives Blythe a gift: A trailer hitch to attach the kiosk to the scooter. When Blythe finally admits that she had to trade away the scooter, Roger says he already knew and that he went to the shop to buy the scooter back. Impressed that Blythe was mature enough to make that kind of decision, he shows Blythe's scooter waiting for her down on the runway, where she and the pets, overflowing with happiness, ride off.