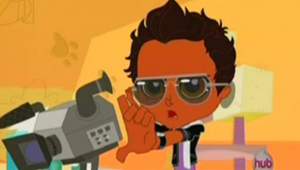 Blythe: "'Adieu'? Could he get any more full of himself?" Youngmee, Sue, and Mrs. Twombly: "No!"
Story by Julie McNally Cahill, Tim Cahill, and Roger Eschbacher
Teleplay by Roger Eschbacher

It's a slow day at the Littlest Pet Shop. The only people who walk in are those mistaking the store for something else. Bored out of their minds and losing money, Blythe suggests making a commercial using Jasper's help in order to avoid the high production costs needed otherwise. Youngmee and Sue gladly offer their help too, and the three of them wait for further word from Blythe.

The pets get wind of this and imagine what the commercial would be like: Pepper depicts an infinite space filled with shelves and pet supplies where Russell narrates and Pepper demonstrates; Vinnie imagines an urban hip-hop environment with equally over-the-top dialogue, though Minka quickly criticizes it; Sunil intends to incorporate his magic tricks with Penny in presenting the products but promptly chars them both; and Zoe goes into a musical number.

Over at the front area, Blythe and Mrs. Twombly brainstorm their own ideas for the commercial, Blythe on her computer and Mrs. Twombly on paper. Blythe reads Mrs. Twombly's suggestions, but they are all overblown spectacles beyond the capabilities of Blythe and her friends. Blythe is required to reject them all, but Mrs. Twombly doesn't mind, as long as she gets to be in it. As Blythe mentions Jasper being a quiet, laid-back person, Jasper makes his way into the Littlest Pet Shop with a loud wardrobe and an even louder voice with Youngmee and Sue in tow carrying his heavy equipment.

Before long, he sets up his stuff on the other side of the road, with Sue behind the camera and Youngmee handling the clapper. Everyone in the shop, on the other hand, cannot hear the outdoor crew from across the street. Mrs. Twombly steps outside in confusion, ruining the first take, and Blythe does the same later to point out the bad signals from the walkie-talkies, ruining the second take. On the third take, everyone stays inside the shop as Jasper intended, but the camera's battery runs out.

Later, with the first shot done, the camera is moved inside, and Mrs. Twombly is asked to say her lines in front of the camera. She forgets what she's supposed to say and repeatedly mistakes Blythe reading the script to help her remember as the line being finished. Before long, Jasper stomps away in frustration, though not before scolding Blythe for pointing out what Mrs. Twombly is doing wrong.

The next shot involves Blythe and the Littlest Pet Shop day camp regulars, his intention to have the pets sitting in one place. When Blythe suggests having the pets move around like animals would, Jasper snaps back at her for questioning him. He relents, however, and gives each pet his or her own shot of doing whatever makes them special. The pets all find a way to mess up their performances, or lack thereof, except for Zoe, who gets an equipment screw-up instead.

Jasper decides to just use the footage he obtained and make something out of it, leaving the Littlest Pet Shop, along with the rest of his crew. He immediately gets to post-production work and informs Blythe that he will use the footage with his special effects programs to simulate the pets talking but also points out that Mrs. Twombly must be cut from the commercial. Blythe's protests are in vain, however, as Jasper refuses to compromise.

Some other day, when Jasper has finished the commercial, he holds a screening at the Littlest Pet Shop's second floor. Blythe, unable to confront Mrs. Twombly about her lack of presence in the commercial, asks Jasper if he took her suggestions for voices, but Jasper says he turned them down and walks into the screening room without Blythe. The screening begins, and the commercial simply turns out to be Jasper digitally manipulating the pets' footage to speak with static backgrounds, with him voicing all of them himself, including Minka and Zoe. Everyone in the room but Jasper is aghast at his ego all over it. Jasper, not noticing the negative reactions all, has announced that his father pulled some strings and will allow the commercial to air the following day.

An angered Blythe leaves the screening room and heads to the day camp room where she spots Mrs. Twombly crying in the corner slide. Blythe calms her down, and Mrs. Twombly asks if Jasper is always like this, to which Blythe tells her that she's never seen this side of him before. Mrs. Twombly suggests she confront Jasper and get to the bottom of his attitude problem. Blythe heads straight back to the screening room and tells Jasper that making this commercial was supposed to be a team effort and to respect the wishes of everyone involved. Seeing Blythe mad at him makes him realize how he behaved and says that he set that air around him out of fear of failure. He runs out of the building, this time assuring that he will comply with everyone's requests. When it comes time for the commercial to air, Jasper—who is now absent from the screening—has made resourceful use of the failed footage of Mrs. Twombly and has supplied voices for the pets using Blythe's input, albeit with the voices switched. Nevertheless, everyone is satisfied (except Zoe, whose voice is switched with Russell's).

The commercial proves a success, and business picks back up at the Littlest Pet Shop the following day. Mrs. Twombly, now having full faith in Jasper to make something good, presents him with a movie script, which he politely turns down.