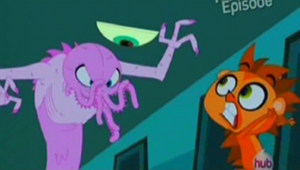 "There's no such thing as ghosts." "Except for one urban legend about a massive sewer-dwelling reptilian poltergeist that feeds on (gulp) hedgehogs! (Beat) But...that's just silly! Heheheh, heheheh, heheheh, huh..."
Written by Tom Minton

Russell lets Blythe know he's going to stay at the Littlest Pet Shop overnight the following day, as his owners are out of town. Upon hearing this, Blythe decides to accompany him over the night as well. Their conversation gets interrupted, however, when Blythe slips and falls due to a puddle of water on the ground. The two of them also notice an open can of fish food. They deem it strange but pass it off as no big deal.

When Sunil and Vinnie see Russell packing his pet bed, they ask him what he's doing. Russell excitedly gushes about what his sleepover with Blythe is going to be like, causing the two of them to want to come too.

The next day, Blythe and Mrs. Twombly find another open can of fish food, this time with a chewed-up fish toy. Mrs. Twombly jokes that there's a ghost in the shop, which Russell overhears and takes seriously. Blythe reassures Russell that they were just joking, though Mrs. Twombly refers to seaweed as "ectogoop" in the PA message to Blythe, scaring Russell again.

In the day camp, Vinnie tells Sunil how they should break into the Littlest Pet Shop at night to crash the party, though Sunil has his doubts—and repeatedly demonstrates gaping holes in Vinnie's plans, which he ignores. Nevertheless, Sunil chooses to accompany Vinnie anyway.

When Blythe returns to the day camp to begin the sleepover, she sees Russell researching ghosts online. He concludes ghosts aren't real but gets worked up over supposed sightings of the Poltergeist, a cryptid resembing a magenta cephalopod that targets hedgehogs. To help Russell with his worries, Blythe has prepared glow-in-the-dark necklaces for herself and Russell. She also brings a board game about princesses, which Russell is not interested in until he sees the gigantic rulebook. Dissatisfied with the materials, Russell decides to make his own game with it.

Meanwhile, Sunil sneaks out of his owner's apartment room, as has Vinnie. They go into the alley behind the Littlest Pet Shop building and tie themselves to a large metal pipe, then climb up a telephone pole. As Vinnie and Sunil reach the top and leap down towards an unlocked window below, the pipe flies up and jams itself in the telephone's transformer, blowing it out and cutting out the electricity to the entire metropolitan area. Russell panics from the sudden darkness until the emergency lights turn on, and Blythe heads to the back of the store to check the fuses, leaving Russell all by himself. With no one to console him, Russell hallucinates the Poltergeist chasing him around the building, then passes out.

Blythe notices the fuses are still fine, so she resets the circuitbreakers, to no avail, concluding that a power outage has happened. She returns to find Russell, and he tells her that he heard a squishy noise. Blythe heads off immediately to go look for the source, leaving Russell alone again. Blythe finds a trail of puddles at the storefront and follows it.

Undeterred by the power outage, Sunil and Vinnie continue to find ways to get in through the window, which they have since opened the top of. After several ideas from Vinnie and Sunil, all ending in Vinnie smacking into a wall or falling into a tree, Vinnie finds a ventilation shaft on the side of the building and climb in. By now, the maintenance crew has arrived at the telephone pole and are in the midst of repairing the transformer.

Blythe hears a crash and Russell's scream and goes over to see what's going on, leaving the room just in time for Vinnie and Sunil to come crashing down into the Littlest Pet Shop's storefront. Trying not to cause too much noise, they bump into a bunch of stacked cans of pet food, causing a ruckus. As they emerge from the pile, tentacles come down from above without them noticing and snatches them away. Russell hears their screaming, recognizes them, and hurries over to see a silhouette strongly resembling the Poltergeist carrying Vinnie and Sunil. He throws his glow-in-the-dark necklace at the figure, who reveals himself to be a small octopus who was being sent to an aquarium. A recklessly-driving Roger almost had a head-on collision with the truck, causing the driver to swerve and the octopus to spill out the back. The octopus wandered the streets for a short while and got washed into the sewers, where he climbed up a pipe and emerged in one of the wash tubs at the Littlest Pet Shop. He had since stayed in the shop, consuming the fish food and coming out only at night when no one is around. Introducing himself as Ollie, Blythe lets him join the sleepover with Russell and will call the aquarium in the morning to let them know where he is. Blythe has also spotted Vinnie and Sunil and lets them join too, starting with a game of Princess Supreme using Russell's rules, but not before getting them washed up from the grime in the ventilation shafts.