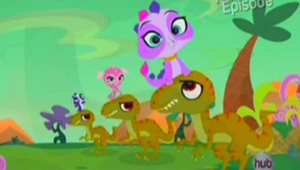 "Wow! Look at the dinosaurs! Look at the trees! Look at that volcano! Oh, I love what your imaginations have done with the place!"
Written by Merriwether Williams

As Blythe walks the Littlest Pet Shop pets down the street, Sunil's attention turns to a bus stop advertisement for a movie called Crazy Zombies 2: Museum Zombies. Blythe, not wanting him or anyone else to get too distracted, keeps them moving but finds out the park has been closed for reseeding. Pepper suggests the fields in front of the museum across the street—Blythe initially refuses, insisting on returning to the shop but is eventually convinced to bring them there.

As they play with the ball in front of the museum, Minka accidentally tosses it into the museum, right as a door is opening. Minka, not wanting to lose the ball, dashes inside with Penny Ling trailing close behind, ignoring Blythe screaming to come back. When Blythe and the other pets approach the museum doors, she notices a sign banning pets from the museum. As she ponders over what to do, however, the ball bounces ever deeper into the museum with Minka and Penny on their trail. The ball lands between the toes of a tyrannosaurus skeleton, but before Minka can pick it up, she and Penny look up and marvel at the skeleton. Blythe eventually decides to put the pets in bags to conceal them as she walks in. She immediately gets the notice of a security guard, who asks her what's in her bags. She nervously stammers, trying to avoid the answer, but the guard just tells her she could keep the bags in the bag check. She turns down his offer and gets far away from him.

Back at the tyrannosaurus skeleton, Minka won't stop telling Penny about how awesome it must have been while Penny repeatedly asks her to find the ball and get out of the museum. Minka, instead, creates an imaginary prehistoric world filled with her favorite dinosaurs. Somehow, Penny gets sucked into it, and they play around with MinLing, a baby triceratops.

As Blythe continues to search for Minka and Penny, Pepper starts emitting a stench from getting nervous. This draws everyone's attention towards her, including the security guard, who spots Russell in Blythe's backpack. As he demands a search for Blythe's bags, Zoe leaps out of the tote bag and runs off, scampering and barking. Blythe claims that someone let their dog loose in the museum, and the guard cases after Zoe instead. While Blythe escapes the guard once again, she realizes she now has a third pet to find in the museum. Zoe finds the tyrannosaurus skeleton, however, and ponders how long it would take to bury all of those bones. Zoe meets up with Penny and Minka and she, too, winds up in Minka's imagination.

As Blythe continues to search, she meets up again with the security guard, who now immediately gives chase to Blythe. She loses him by turning into a broom closet. When they see the doorknob shaking, Vinnie and Sunil go back into the tote while Russell, leaping out of the backpack to get away from Pepper, curls into a ball as Blythe hides behind a mop and turns off the lights. The janitor walks in, grabs Russell mistaking him for a sponge, and drops him into his mop bucket full of dirty water. Russell eventually escapes by the tyrannosaurus skeleton and evades the security guard's notice, then finds Minka, Penny, and Zoe behind the sign.

For an unexplained reason, Pepper has been moved to the tote bag with Vinnie and Sunil. Vinnie and Sunil soon reach their limits of Pepper's odor and leave the bag, leaving Blythe alone with a frustrated Pepper. However, they find themselves in the taxidermy section surrounded by large animals and freeze in terror, finally fleeing when Fred, a man working as the museum's mummy mascot, stumbles into the room. In their panic, Vinnie and Sunil fall into the janitor's mop bucket. After Russell gets pulled into the prehistoric fantasy, they hear an announcement that the museum will close in five minutes and that everyone has to make their way to the exit. He warns them that they need to find Blythe, but Minka doesn't know how to end the fantasy. Fortunately, Blythe finds the four of them and puts them back in her bags, bringing them back to reality. As Blythe decides to confess that she broke the rules by bringing pets into the museum, Vinnie and Sunil zoom by on the janitor's mop bucket and out the door, eliminating the need to do such a thing.

As everyone reunites on the steps of the museum, Blythe regrets that the ball has gotten lost. Minka pulls it out from behind her back, only for it to start hatching with Penny discovering MinLing inside.