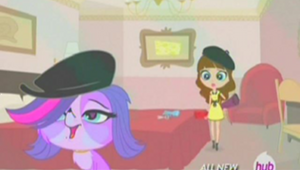 "Are you still daydreaming about that mime?"
Story by Julie McNally Cahill, Tim Cahill, and Adam Beechen
Teleplay by Adam Beechen

The episode begins with Blythe attempting to study French with the pets nearby but with little success. However, Roger bursts into the Littlest Pet Shop and informs Blythe that Zoe's owners are sick and cannot take Zoe to a dog show in Paris, and they have requested Blythe be their substitute.

As Blythe boards the Pet Jet, Roger introduces Blythe to his co-pilot, Stephanie, who lets Blythe know that her daughter Emma is already on board. Blythe heads to the cabin to meet Emma, who introduces herself and her aspirations as a tour guide. To that extent, she has a stack of foreign language books next to her that she studies as she chats. During the conversation, Blythe spots Zoe a bit further down and excuses herself to sit with Zoe as Emma returns to her studies. Zoe, it turns out, is barely able to contain her excitement at getting to meet up with Madame Pom once again. As the Pet Jet takes off, Blythe reassures Zoe that, despite her thrill at getting to tour Paris, Zoe's needs will come first.

Back at the Littlest Pet Shop, Mrs. Twombly rolls in the TV to prepare for Zoe's televised appearance on the dog show. However, as she surfs through the channels, she realizes her programming package does not include the channel the pet show will be on. Mrs. Twombly stops on the Insect Channel, which catches Vinnie's interest, and leaves the room to look into the issue further.

Arriving in Paris, Blythe gets easily distracted by everything she sees, requiring Zoe to put her mind back on track. Blythe says the dog show grounds are near the Eiffel Tower and is comforted she's heading towards it already. Along the way, however, Zoe passes by a French Spaniel street mime named Philippe. After he performs a rose-plucking gesture for Zoe, she becomes smitten with him, and Philippe returns her affections.

Blythe reaches the dog show grounds, and Madame Pom cheerfully greets her. Zoe, however, is too distracted thinking about Philippe to even notice Madame Pom, before Madame Pom leaves. Having staked out the location, Blythe escorts Zoe back to the hotel room and sews Zoe a dress. She asks for Zoe's opinions, but again, Zoe's attention is completely elsewhere. Emma comes into Blythe's room and asks if they would like to tour the city together. Despite the dog show being in a couple of hours, Blythe figures she has time and drops Zoe at the dog show grounds. The moment Blythe leaves, Zoe sneaks out.

At the Littlest Pet Shop, Mrs. Twombly has spoken to her cable provider and has gotten the channel added to her package. She changes the TV from the Insect Channel to the new one and causes Vinnie distress, as he can no longer stare at the flies. The moment she goes somewhere else, Vinnie grabs the remote and changes it back to the Insect Channel, scaring off anyone who even comes close to the remote. Russell attempts to distract Vinnie by mentioning an all-gecko dancing event outside, but this does not deter Vinnie one bit.

In Paris, Zoe returns to Philippe and sits by him in awe. Philippe attempts to just do his job, but Zoe keeps interpreting it as signs of his love for her. Meanwhile, Blythe goes around shopping for fabrics. Emma notices Blythe is losing track of time and suggests they return, but Blythe insists on one or two more things. Zoe brings Philippe to the dog show grounds and introduces him to Madame Pom. Philippe does his rose gesture to Madame Pom too, causing Zoe to steam up. Madame Pom's attempts to explain that Zoe is just seeing what she wants to see are in vain, and Zoe storms out of the dog show grounds with Philippe, convinced that Madame Pom wants to sabotage Zoe. At the café, Blythe realizes she's late for the dog show, and Emma calls a taxi. They head straight to the Eiffel Tower but are immediately caught in a traffic jam.

Russell finally gets Vinnie's attention away from the TV with a fake fly attached to a fishing rod. As Vinnie chases the fly around, Pepper leaps onto the remote and changes the channel. When Vinnie discovers it was a trick, he finally notices that he selfishly got caught up on the Insect Channel and allows the others to watch the dog show in Paris.

Zoe walks down the street with Philippe when they stop and he does his rose-picking gesture with Zoe again. Watching him do it repeatedly, as well as his adamant refusal to say anything, makes her realize her feelings had interfered with her goals. Zoe then hears an announcement fo the dog show starting and scrambles back as fast as she can. By the time she reaches the grounds, she has already been disqualified for not showing up. She sees Madame Pom onstage in line and asks for her forgiveness, which Pom accepts. Blythe then runs up onstage, deciding instead to reach the dog show on foot. The two of them apologize to each other profusely for being late by getting distracted. Madame Pom pulls some strings, however, and drops out of the competition, re-entering herself in the duo division with Zoe as her partner. The two easily win that division, and Zoe promises to keep herself firmly down-to-earth, with Blythe stepping in whenever she gets too lovestruck.