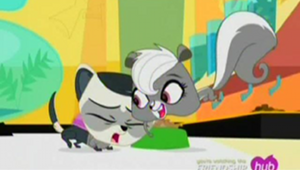 "Well Pepper, the main thing you have to remember is to always make Captain Cuddles feel like he's the center of your attention!" "And you don't think an arm punch tells him that? Huah!" "Nooo!"
Written by Julie McNally Cahill and Tim Cahill

Blythe gets really into a book that she wants to finish by nightfall so she can watch its movie adaptation with Youngmee and Jasper. Working in her favor is that the day is a half-day, but it means she'll still have to squeeze in reading time as much as she can. To that extent, she scurries out the door, passing Mrs. Twombly along the way. Mrs. Twombly steps in the day camp room and introduces a new pet, a European polecat named Captain Cuddles. While the other pets greet him casually, Pepper becomes instantly smitten with him. She punches him in the arm and runs away.

At Sweet Delights, Buttercream vainly tries to get Christie's attention, but Christie is in too much of a hurry trying to finish an order for later that day, frantically searching for her notes. Christie picks up Buttercream, then turns her around and finds the note on the back of Buttercream's head and puts her back down. Frustrated, Buttercream heads out the door.

Back at the Littlest Pet Shop, Zoe notices Pepper's stench coming from behind the armchair and asks what's going on. Pepper vehemently denies any feelings she has for Captain Cuddles and becomes even more nervous when Russell calls him over. Russell points out that skunks were once referred to as polecats, with Captain Cuddles responding that the two animals are not closely related and that polecats are actually a type of weasel. Pepper, amused at Captain Cuddles calling himself a weasel, lovingly stares back at him, punches him on his front leg, and dashes into the compartment above the slide to get some alone time. This comes crashing down, however, as Pepper finds Buttercream in there, desperately searching for company with a human. Pepper informs Buttercream that Blythe will return early, then descends into a series of fantasies of romance with Captain Cuddles followed by Pepper pranking him. The fantasies only sour Pepper's mood further, however, and she stinks up the hideaway so much that Buttercream is forced out. Zoe witnesses the fumes coming out from the compartment and suggests to Minka and Penny Ling a makeover for Pepper.

A few minutes later, Blythe dashes across the day camp to get to her room in order to finish her book. Along the way, Russell and Vinnie inform Blythe that Pepper's not feeling well, pointing to the noxious cloud emanating from the hideaway. Before Blythe can fully understand the situation, Buttercream leaps onto Blythe's leg and insists that Blythe hang out with her. Blythe tells Buttercream that she should make sure Pepper is okay, but with Zoe running about tending to Pepper, Blythe decides she'll keep Buttercream company and heads up with her through the dumbwaiter. Blythe puts Buttercream on her lap and combs her head, then gets a call from Youngmee nonchalantly mentioning Spoiler moments in the book, prompting Blythe to hang up immediately.

Zoe calls Russell over to the grooming room and asks Russell to to subtly let Captain Cuddles know Pepper likes him. Russell, instead, tells it to him outright. Nevertheless, Russell provides Zoe enough time to ready the grooming platform for Pepper's makeover. With assistance from Minka and Penny, they apply makeup to Penny's face, and after a good look in the mirror, Pepper feels ready to punch Captain Cuddles again. Before Pepper can leave the room, however, Zoe offers Pepper some behavioral tips. Penny is the first up, suggesting to act like every joke Captain Cuddles tells is funny. Pepper takes offense, since as a comedian, she takes humor seriously.

Blythe pets Buttercream until she falls asleep, then sneaks her way back to the book. As she's about to start reading, Buttercream springs awake again with an itch that refuses to go away. Blythe scratches Buttercream's back for a while, but Jasper contacts Blythe over his computer. He, too, is about to reveal a spoiler, but Blythe stops him in time. After trying her best not to let Jasper spill the beans, Blythe closes her laptop. Desperate to finish her book, she picks it up, but Buttercream continues to demand her attention.

Minka steps up next with advice on how to keep Captain Cuddles's interest. Her pointer is to keep a good conversational pace and insert interjections and jumping up and down any time she can't think of anything to say. Zoe warns Pepper, however, to try not to sweat too much, lest the makeup smears. The three of them feeling ready, they send Pepper out into the day camp.

Pepper wipes the makeup off her face, leaving the rose in her hair and her eyeshadow. Blythe comes by to see if Pepper is okay, and Pepper tells her that trying to be a "girly-girl" is not working for her. Blythe reassures Pepper that there's no one way for a girl to act and to try reintroducing herself to Captain Cuddles as the Tomboy that she is. Pepper gives it another try, and this time, when asked if she can tell jokes, loosens up and finally manages to strike a normal conversation with him and even laugh together.