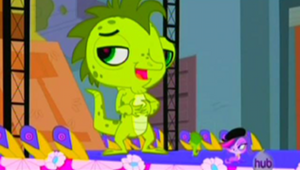 "Hey! I'm thirsty! Grab me the biggest water bottle you can find, and you get to ride this float with a star''!"
Written by Tom Minton

Blythe had created designs for feathery dresses on her own time and was so pleased with them that she lets the pets know she'll submit the designs to Ramon, head designer for the upcoming Big, Feathered Parade. When she actually gets to the parade's warehouse, however, she gets turned down due to being under the age minimum for submissions and is promply ejected. As she heads out, she encounters Ramon himself, who introduces himself and his myna bird Desi. Ramon agrees to see Blythe's designs and is incredibly impressed by them. He puts Blythe's sketchbook back into her portfolio and switches it with his identical portfolio, wishes her luck in the future, hands his portfolio to an oblivious Blythe, and leaves as Desi witnesses the whole thing happen.

Back at the Littlest Pet Shop, the pets browse the Big, Feathered Parade website, and Vinnie is excitedly surprised to find out the Iguana Legal Firm is sponsoring the upcoming parade, and even more so when he hears Bruce's special announcement of being in the parade. As Vinnie gets stoked about going to the parade to see Bruce, Blythe walks back and relays the news to the pets of everyone turning her down because of her age. A piece of paper slips out of the portfolio, which Zoe spots and pulls out. She instantly notices these designs are not the ones Blythe showed her earlier and informs her. Upon hearing that Blythe will return to the warehouse the following day to correct the mixup, Vinnie asks to come along to see Bruce, so Blythe lets him tag along.

Blythe arrives at the warehouse the next day with Minka, Zoe and Vinnie, only to see Ramon and everyone else wearing Blythe's sketchbook designs. When Blythe accuses Ramon of stealing her designs, he denies it, and when Blythe shows that she has his portfolio, he accuses Blythe of stealing his designs and takes his portfolio back. Blythe, now stewing, stomps away.

Elsewhere in the warehouse, Zoe accompanies Vinnie, and Vinnie eventually spots Bruce's float. Vinnie and Zoe see Bruce talking on his cell phone, and, not realizing he's a human, try to get his attention. Bruce jokingly tells Vinnie and Zoe that he has no time for fans and gets back to his phone. Zoe takes offense to Bruce's apathy and wants to leave, but Vinnie, still enamored, will not move from his spot.

Blythe, now at the judges' table, has no luck convincing the judges that Ramon stole Blythe's designs, and as the judges have never seen them, she is unable to prove it. Blythe sees Desi flying by overhead, however, and sends Minka to see if he knows anything. Desi is initially hesitant to reveal any information as it could potentially discredit Ramon, but when Minka presses him, he accidentally reveals a bald patch on the back of his head. Desi finds out from Minka that Blythe could help him by designing something to cover his bald patch, so he decides to cooperate. Minka relays the information about Desi to Blythe, and when Blythe catches Ramon's attention again, she asks why Desi is afraid of Ramon. Rather than answering, Ramon warns her that he'll call security to forcibly boot Blythe out.

Zoe, now incredibly bored, waits for Vinnie to lose interest in Bruce and go somewhere else. Vinnie overhears Bruce saying he's thirsty and that whoever gives him the biggest bottle of water gets to be on the float with him. Vinnie finally gets off the float, dragging Zoe along, to go find a lot of water. Zoe finds for Vinnie a glass of water, a water cooler, and a stack of bottled water in wholesale packaging, but Vinnie insists there must be bigger sources.

With Ramon away, Blythe asks Desi about his bald patch. He says that Ramon stresses Desi out so much that it causes his feathers to fall out before he can properly molt. Blythe agrees to make a feathery hat to cover Desi's bald patch, so Desi tells Blythe that Ramon was having a mental block and plagiarized Blythe's ideas. The security officer eventually finds Blythe, but before he can escort her out, Blythe tells Desi to confess what happened. Unfortunately, Desi is too scared to speak ill of Ramon in his face, and Blythe is once again unable to stop Ramon.

Ramon gives Blythe's portfolio back, and Blythe opens her sketchbook to see the pages torn out. Desi covertly tells Blythe to turn the page, and Blythe sees Desi's feathers in the book. She evades the security officer and heads back to the judges to show them that Desi's feathers have been attached to the following page. She also notices that two of the pages have become stuck together and pours water to try to get them unstuck. Ramon catches up to Blythe and immediately yells at her about how water dissolves his homemade solvent. The judges, hearing this, realize that Ramon had gotten his hands on Blythe's sketchbook. The head judge tells the security guard to get Ramon out of the warehouse and credits Blythe for the costume design. Desi gains some confidence, too, with more loving allies, and the head judge becomes Desi's new owner.

Vinnie and Zoe find a tank of water being brought in by a truck, and Vinnie decides that would be the biggest bottle in the area. The two of them dislodge the tank from the top of the truck, and Vinnie rolls it over to Bruce. Vinnie trips on his tail as he's rolling it over, however, and loses control, causing it to crash into Bruce's float. The tank damages the machinery projecting the large holographic image of Bruce, and it breaks down, revealing the mo-cap actor in the back. Now identified as Morgan, he quits his job and flees. Blythe suggests Vinnie to a parade staff member, and when it comes time for the parade, Vinnie now has a mo-cap suit of his own, waving and dancing to the audience watching the parade as Desi flies about proudly with a new headdress.