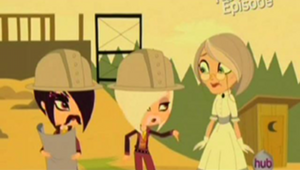 "Would you kindly tell us where the treasure, like, is?"
Written by Guy Toubes

The episode opens with a clip of Treasure Hunters, where the host, Riley Robinson, heads to the Littlest Pet Shop in search of a treasure chest buried underneath the building. His crew barge into the pet shop without warning, and a startled Blythe tries to find a place to sit down and take it all in. After the producer denies her any chair in the front area, Blythe retreats to the day camp room and lets the pets know the Treasure Hunters crew is in the shop. Zoe and Vinnie dress up like pirates, but before they can do anything, Pepper tells them that the show is a nonfiction series about finding treasure. Mrs. Twombly makes some tea for all of the guests in the room, but she is unable to converse with anybody except Riley, who accepts her tea. He takes a sip of it but has to put it down when the camera starts rolling.

Riley, for the show, explains what happened at the Littlest Pet Shop location over a century ago, which was still a forest: Henrietta Twombly, an ancestor of the modern-day Anna Twombly, was rumored to be able to talk to animals. She kept a treasure in a chest at her cabin, which she shared with her animals and told them that they would never have to go hungry again. Peeking in through a window are Whittman and Brittman Biskit, who overhear Henrietta and covet that treasure.

Back in the present, Riley, on camera, follows the directions written on a treasure map he recently found, whose "40 paces" lead to an empty area in the pet shop's central room. Riley's crew immediately gets to work digging a hole in that spot. As they excavate, the pets emerge from their room, where Blythe tells them that the network will likely keep the treasure for itself and that Mrs. Twombly will get none of that. Pepper, outraged, takes the treasure map and lets the other pets see it, where everyone is shocked except Vinnie.

In the past, when Henrietta leaves the cabin, Whittman and Brittman attempt to sneak in and get the treasure, but Monkey traps them with the windowsill while the other pets except Dog scramble out with the chest. They bury it in a meadow nearby and cover it with a pile of leaves as Dog barks incessantly at Whittman and Brittman to stall them. Brittman slams the door on Dog but is almost immediately greeted by Sheriff Blythe, who ejects them from the premises. Watching from a distance are Henrietta's animal companions, where Hedgehog draws up the treasure map. In the present, Russell confirms this by using one of his spikes as a reference and concludes that the 40 paces must be hedgehog-sized, which instead leads to the building's back alley. Blythe discovers a manhole made by "Biskit Brothers Construction," and Sunil and Russell head into the sewers.

Sunil and Russell emerge empty-handed, but Blythe and the pets overhear Riley exclaim in joy. They rush over to the front to see Mrs. Twombly has found an old box containing Biskit Brothers Construction blueprints for the building Sweet Delights is currently in detailing a secret room. Riley barges into Sweet Delights and peels back some wallpaper and at once finds the Biskit Brothers' "B" hand-engraved in the wall.

Eventually, Whittman and Brittman recover the treasure chest, and in pursuit by Sheriff Blythe, run into an adjacent building and hide it within a hole in the wall. Brittman splashes some mortar on the wall and etches their signature "B" on it as a marker.

Riley smashes a hole in the wall and climbs inside, only to find nothing inside. The pets notice paw prints on the floor, however, which Pepper identifies as that of a skunk. It turns out that Henrietta's animals caught Whittman and Brittman discussing the secret compartment, and Hedgehog creates a hole on the back of the building. As they carry the treasure out, the Biskit Brothers spot them and give chase, though the animals eventually lose them.

Blythe and the pets return to the Littlest Pet Shop and see Riley having an argument with his crew about their failure to find the treasure. Blythe distracts the crew by claiming to have found a lead while Pepper connects the cabin's old photograph and the blueprints together to figure out the location of the tree the animals once lived in. Pepper concludes it's the dumbwaiter, and all seven pets hop in. Along the way, Penny Ling loses her grip, exhausted having to carry everyone up, and they fall down the shaft, crashing through the bottom and finding themselves in an old mine with the treasure right in front of them.

Whittman sees Skunk's tail in the hollow tree, so Brittman takes a nearby saw and, with Whittman's help, cuts it down. The tree lands on the cabin, destroying it. As they reach in for the treasure, however, Sheriff Blythe handcuffs them. Henrietta arrives and asks Blythe to let them go—so that she can force them to build her an animal feed shop where the cabin once stood.

Blythe hears the pets' cries for help from the dumbwaiter shaft and, with Riley's help, gets them back up, along with the treasure chest. Riley opens it, only to see a big pile of pet kibble inside. Frustrated at the lack of anything of monetary value, he and the crew storm out of the shop. Mrs. Twombly, however, finds a book of Henrietta's recipes within the kibble and takes it for inspirations as the pets eat their way through the kibble.