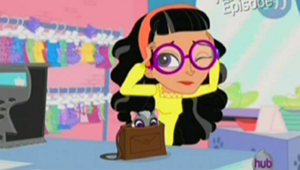 "I know that little Sweet Cheeks loves his life in my purse…The truth is I know what all pets are thinking." "Each and every one of them?" "You see, I'm a pet psychic!"
Written by Corey Powell

The episode opens with Blythe running late for school, leaving her with no time to hang out with the Littlest Pet Shop pets. As she rushes out the door, a woman comes in for a large order of Nummy Nuggets for Sweet Cheeks, her sugar glider. When Mrs. Twombly tells her she seems to be in tune with her pet, she claims to be a pet psychic, who always knows what pets are thinking. When Mrs. Twombly unintentionally presses her further regarding her abilities, the psychic diverts the topic back to Nummy Nuggets, upon which Mrs. Twombly confesses that she doesn't carry them but places a special order for her.

Mrs. Twombly leads the psychic into the day camp room and asks about the regulars. The psychic labels all of the pets as the exact opposite of their actual personalities and tells Mrs. Twombly that the spiky thing (Russell) requests to make the room messier. Mrs. Twombly furiously jots down notes as Russell, overhearing the psychic, becomes confused. Among the psychic's observations is that Zoe hates getting dressed up, so Mrs. Twombly removes Zoe's signature beret, causing her to cower in embarrassment. Mrs. Twombly is so pleased with the psychic that she asks for her to work in the Littlest Pet Shop in her own section. The psychic happily obliges, retrieving all of the necessary items from her car as the pets look on concerned.

By the time Blythe returns, she sees the day camp in chaos, with the likes of Sunil fumbling around on a skateboard and Zoe in hiding. When Blythe asks Pepper what's going on, she says that a psychic named Finola had made assumptions about the pets, with Mrs. Twombly providing the pets with materials she believes the pets wanted. Russell comes up and tells Blythe that they have to behave this way because Mrs. Twombly expects them to, so Blythe heads to the main shop area and sees Finola has set up a stand with a long line. An infuriated Blythe confronts Mrs. Twombly about the Finola about the pets being highly dissatisfied, but because she has to keep her ability to talk to animals a secret, she is unable to stop Finola or Mrs. Twombly. Mrs. Twombly interprets Blythe as being jealous and reassures Blythe that Finola is a professional, also pointing out that business has increased dramatically.

Blythe finds Roger's hat and puts it on Zoe as a temporary substitute and discusses with the pets how to expose Finola as a fraud without offending her. Blythe tells them to pretend that Finola is right, but the pets object to that, particularly Russell, who's at his limits, but she says to only do so until she can come up with something.

Not long after, Blythe gets in Finola's line, overhearing the woman in front being told to buy Nummy Nuggets for her cat. When it's Blythe's turn, she tries asking Finola for advice on how to be a psychic too, but Finola brushes her off and says that it can't be learned. Finola immediately starts helping the next person in line, and in that moment of distraction, Blythe sees Sweet Cheeks in Finola's purse desperately seeking help from Blythe. Blythe makes off with Sweet Cheeks without Finola caring and heads off to the park. Blythe finds a bench and lets Sweet Cheeks out of Finola's purse, when Blythe finds out that Finola treats him like an accessory, never letting him out of her purse. To this end, Blythe allows Sweet Cheeks to play around in the park and see the sights for the first time.

When Blythe heads back to the Littlest Pet Shop, she sees a Nummy Nuggets truck parked in front of it and Finola's line going out the door. Upon walking in, she notices the storefront stuffed to the ceiling with boxes of Nummy Nuggets. Blythe asks Mrs. Twombly about what's going on, and she tells Blythe that Finola has discovered a massive hankering for Nummy Nuggets among all pets. Blythe covertly asks Sweet Cheeks about this, and Sweet Cheeks tells her they taste terrible. Now sure of a connection between Finola and Nummy Nuggets, Blythe lets the pets know about it and introduces them to Sweet Cheeks. The pets less-than-enthusiastically say hello to Sweet Cheeks, and Blythe heads up the dumbwaiter with Sweet Cheeks in the purse.

Before long, the massive line has shifted to Mrs. Twombly's front counter with angry people demanding refunds for Nummy Nuggets. Blythe, in disguise, makes her way into Finola's line again with Sweet Cheeks. Towards the front, she spills a bag of Nummy Nuggets to bring Mrs. Twombly over to clean it up and thus within audible distance. When she reaches the front of the line, she asks Finola what the name of her "pet" sugar glider is, Finola no longer caring enough to even look up. When Finola makes an incorrect guess, Blythe takes off her wig and accuses her of not being able to recognize her own pet. In a panic, trying to cover for herself, she spills her purse on the floor. Blythe discovers her Nummy Nuggets employee card and shows it to Mrs. Twombly and everyone else in the pet shop. With this revelation, Mrs. Twombly demands Finola take her Nummy Nuggets and remove them from her pet shop, and Finola literally crawls away.

With the mess regarding Nummy Nuggets over and the boxes being moved back to the company, the pets go back to how they were before, happier than ever. Meanwhile, Finola has returned to the Littlest Pet Shop to apologize and to inform Blythe that all the Nummy Nuggets will be returned to the company but that she's been fired. As she goes looking for work, Blythe suggests she spend some quality time with Sweet Cheeks at the park. When Finola asks if Blythe really is a pet psychic, Blythe just says she's a good listener.