Literature / The City & the City 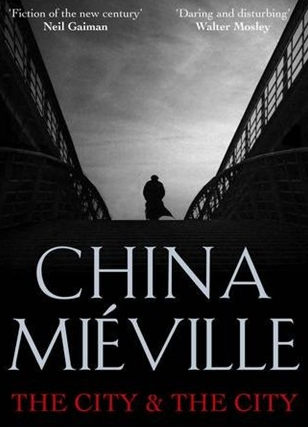 The City & the City is a 2009 New Weird crime novel by China Miéville.
Advertisement:

Inspector Tyador Borlú of the Extreme Crime Squad of the decaying Ruritanian city-state of Besźel is tasked to investigate the murder of an apparent prostitute. However, things are (obviously) more complicated than they initially appear, and his investigation turns international when he is forced to cross over to the sister-city of Ul Qoma to continue his work. What makes this more than your average Murder Mystery is the fact that Ul Qoma happens to be geographically - grosstopically, to use the local phrase - in the same location as Besźel.

No, not just "next to", but literally the same place as Besźel.

In this unique double-city, streets and buildings are regarded as being either part of Besźel or part of Ul Qoma, sometimes with the location changing for individual rooms within buildings or tiny patches of ground. There are neighborhoods of Ul Qoma that are exclusively Ul Qoman, and neighborhoods of Besźel that are exclusively Besź, but when people go to locations that are 'cross-hatched' (part Besź, part Ul Qoman), they must "unsee" what is in the other city-state unless they formally cross borders. To travel between the cities includes the full process of national travel, requiring visas, passports and customs agents. If they ever allow themselves to recognize that there is a person or building in front of them that—legally speaking—is in another city, they draw the attention of Breach, the dreaded power that enforces the separation.

As Borlú goes deeper into his initial murder investigation, he likewise gets drawn into whispered rumors of a third city, Orciny, that exists between the two cities everybody else can see.

In April 2018, a four-part miniseries adaptation premiered on BBC Two

, with David Morrissey as Borlú.