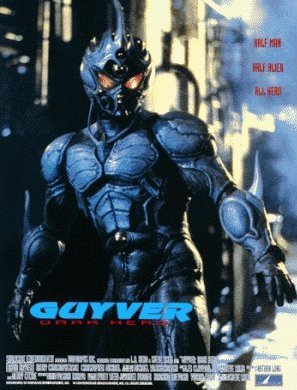 A year has passed since Sean Barker became the host of the bio-boosting armor unit, the Guyver, and destroyed the Chronos Corporation headquarters. Driven to find out more about the unit because it's compulsion to fight and kill threats has lead to him moonlighting as a very lethal superhero, Sean finds out the dreams he's been having match up to finds of a recent archaeological dig. It turns out supposed werewolf and monster sightings near said dig show him the Kronos corporation and their zoanoid shocktroopers aren't as destroyed as he thought they were.

Written by Nathan Long with Steve Wang serving as director and producer, Guyver: Dark Hero is an adaptation of the Japanese manga, Guyver, by Takaya Yoshiki. A sequel to the 1991 American live action film, Guyver, there is no costarring of Mark Hamill this time; but the final product is widely considered a much better result despite a lower budget. This is thanks to much less Executive Meddling than last time, allowing Wang and company to keep the tone consistent note  The previous film was widely criticized because of keeping the graphic violence of the source manga, but mixing it with frequent bouts of silly slapstick comedy . Replacing Jack Armstrong from the last film, David Hayter stars as Sean Barker.

Not to be confused with MacGyver.