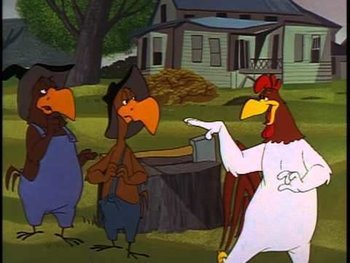 They're gonna have to do it the hard way.
Advertisement:

“The Dixie Fryer” was a 1960 Merrie Melodies cartoon starring Foghorn Leghorn and directed by Robert McKimson. None of his usual foils or counterpoints are here—no Henery Hawk, no Miss Prissy, and no Barnyard Dawg. Just him and a father-and-son pair of hillbilly buzzards (the same ones from the late 1950s Bugs Bunny cartoon, "Backwoods Bunny"), in what becomes a Road Runner vs. Coyote characterization.

During a southward flight on which he’s riding in a basket with helium balloons, Foggy notices the smell of magnolia trees in the air. He leaps off, into his new surroundings, and promptly sets up.

Meanwhile, Elvis and his Pappy are sitting in a nest high in a tree, lamenting their dinner of black-eyed peas. Then they notice Foghorn relaxing away and see an opportunity for a feast. Hilarity Ensues as they go into a back-and-forth, which ultimately ends with the buzzards blasted right back into their nest. Rather than stew over their failures, the buzzards decide to have some black-eyed peas after all—after Pappy pokes Elvis in the eyes.