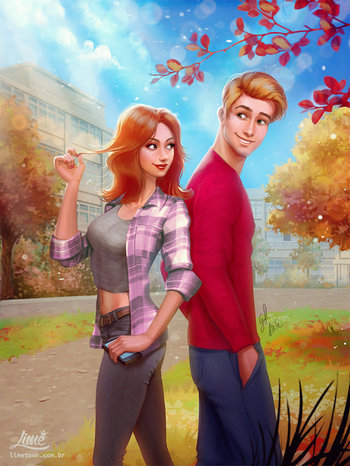 One of the originating 'books' in Pixelberry's Choices: Stories You Play series, The Freshman tells the story of a college freshman who finds herself caught between three different potential love interests, a rival Alpha Bitch, a demanding literature professor, and a score of kind and quirky friends and roommates. Like other works by Pixelberry, the game is high on genre cliches, but also remarkably earnest and diverse.

The Freshman is told in a visual novel format, with choices allowing for brief branches that allow for different love interest scenes and occasionally lead to slightly different outcomes down the line. It also has a premium currency - the player is granted a certain number of diamonds when starting the app, and is gifted a single jewel at the end of every chapter, with these jewels able to unlock premium options that allow the player to wear nicer outfits (which give small bonuses or scene changes), extra scenes, or whole mini-books. Of course, diamonds can be purchased instantly through Microtransactions.

The sequel novel The Sophomore was released soon after, with Book 1 debuting on July 12, 2017. The third entry of the series, The Junior was released on April 9, 2018. The fourth and final entry, The Senior, was released on September 14, 2018.

On December 21, 2018, the final chapter in The Senior was released, concluding the Freshman saga.

open/close all folders
Advertisement:
Tropes applying throughout the series

Lists common tropes in The Freshman, The Sophomore, The Junior, and The Senior.

The Sophomore
The Junior
The Senior