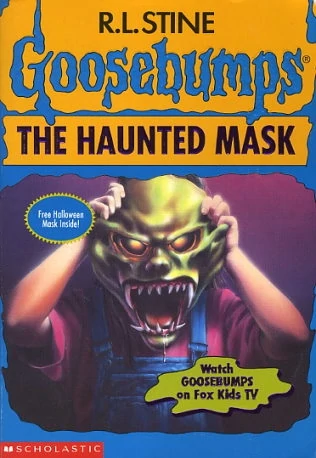 The Goosebumps book about a haunted mask...kind of.

Carly Beth is a scaredy cat and is tormented by the bullies Steve and Chuck as a result. One day she gets sick of it and decides to visit a creepy mask shop to find a scary Halloween mask. In a the back room, she finds the perfect fit, but the Shopkeeper refuses to sell it to her. However, she eventually convinces him and brings it home. After she puts on, she starts acting a lot more monstrous. Is the mask doing this to her, and will she be able to put it off?

It was adapted into the very first episode of the TV series.

It was later reissued in the Classic Goosebumps line in 2008 as a companion to The Scream of the Haunted Mask.