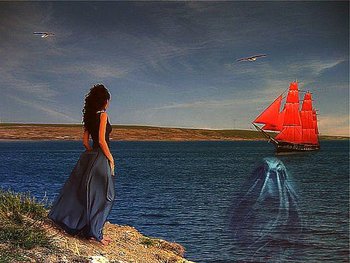 The Scarlet Sails (Russian: Алые паруса) is a 1923 novella by Alexander Grin, set in his Grinlandia universe in the vaguely European seaside village of Kaperna.
Advertisement:

Longren, a sailor, finds out his wife has died while he was at sea: she has given birth to a baby daughter and was struggling to support her, the local innkeeper Menners refused to lend her money, so she went to a pawnbroker in the town during a storm and expired from pneumonia. Longren quits his job to raise Assol and becomes a toymaker. A while later, he sees Menners being carried off to a stormy sea in a boat and calmly stands on the shore; Menners is rescued but lives just long enough to tell the villagers Longren killed him, after which Longren and his daughter become social outcasts.

One day Assol meets a traveling storyteller who tells her that one day, a prince will come to her in a ship with scarlet sails. The dream takes root in Assol's heart, and she believes it firmly afterwards, leading to even more of the villagers' taunts and disdain.

Meanwhile, a rebellious aristocrat Arthur Grey runs off to sea from his oppressive family, and gradually rises from cabin boy to captain. His voyages bring him to Kaperna, where he falls in love with Assol from afar and resolves to make her dream come true.

The Scarlet Sails is a classic in the Eastern Bloc and especially Russia as a symbol of everlasting hope, dream, and love, with several films and a highly popular musical, not counting the endless other stage adaptations, based on it, as well as a famous St.-Petersburg summer festival inspired by the book.

The Scarlet Sails provides examples of: