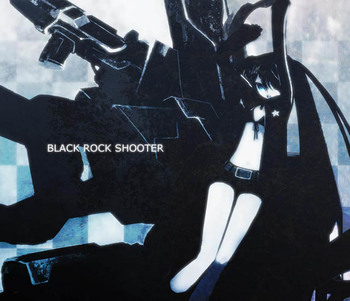 Originally, Black★Rock Shooter was a character created by an artist known as huke, among plenty of other material that he uploaded to his Pixiv profile. One fateful day ryo, leader of Vocaloid synthesizer band Supercell, approached huke to create a song after having been inspired by his work, while also inviting him to join the creative team of the band. This way, the two collaborated on a music video, with huke making some small adjustments to Black★Rock Shooter's design and creating the version known today.

Once uploaded on Nico Nico Douga in 2008, and soon after on YouTube, both the song (performed by Hatsune Miku) and character became a massive success (on the internet anyway) during its time from the late 2000s up to the early 10s.

of the song was released, featuring animated shots of the character.

Tropes found in the original song and its promotional videos: