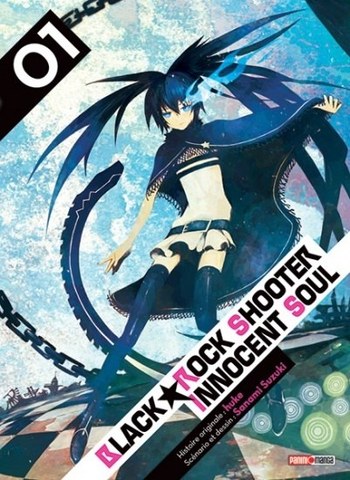 Cover for the first Chapter
Advertisement:

of Black★Rock Shooter has been announced titled Black★Rock Shooter ~Innocent Soul~. Given description: "The story follows a girl in Hazama (Threshold), a world between Heaven and Earth. "Impure souls" — those that could not ascend to Heaven with the burden of their own weight — have drifted to this world of constant warfare."

There is also a separate published 4koma series. Titled Black★Rock-chan, it's really just an Affectionate Parody of the characters and setting; it stars a Pint-Sized Kid version of B★RS with a full-sized Dead Master acting like her mom.

The PSP video game also received a manga adaptation after its release. But for all intents and purposes, tropes applying to the game in general go to the Video Game subpage.

Not to be confused with Black★Rock Shooter – Innocent Souls: a fanmade play-by-post roleplay set in the universe of the manga.

Tropes found in this manga: