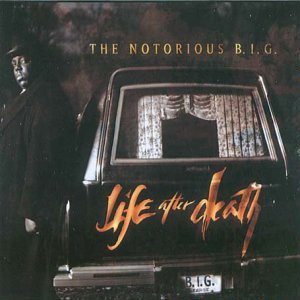 You're nobody, til somebody, kills you.
If the game shakes me or breaks me
I hope it makes me a better man
Take a better stand
Put money in my mom's hand
Get my daughter this college grant so she don't need no man
Stay far from timid
Only make moves when your heart's in it
And live the phrase 'sky's the limit'.
Muthafuckas. See you chumps on top.
—"Sky's the Limit"
Advertisement:

Life After Death is the second album (of two) by The Notorious B.I.G., released March 25, 1997 - just 16 days after Biggie was murdered in Los Angeles, technically making it a posthumous album, though it was completed before he was killed.

A double album, Life After Death goes in a glossier, more mafioso-themed direction than its predecessor, but retains that album's mixture of hardcore songs and lighter party jams. It even picks up immediately where that album's final track, "Suicidal Thoughts", left off. And like Ready to Die, three of its tracks - "Hypnotize", "Mo Money Mo Problems", and "Sky's the Limit" - became singles.

The album was also released at the tail-end of the infamous East Coast/West Coast hip-hop feud of the '90s. It was released a while after the death of Biggie's main rival Tupac Shakur, but retains a few sly references to the beef (such as the line "My so-called beef with You-Know-Who" on "Notorious Thugs"), as well as a few subliminal disses thrown at several other rappers Biggie was beefing with, such as Nas and Raekwon and Ghostface Killah.