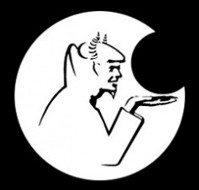 Pretty much dormant now, the Gothom Inc. YouTube channel is mostly used to lob Take Thats at Esham's fans and other rappers.

RLP includes examples of these tropes: